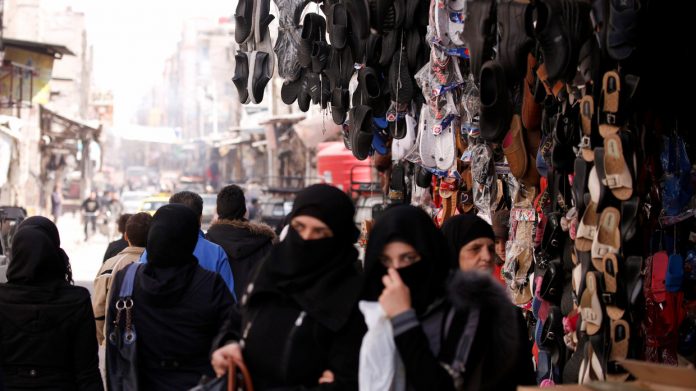 Eva Bartlett is a Canadian independent journalist and activist. She has spent years on the ground covering conflict zones in the Middle East, especially in Syria and Palestine (where she lived for nearly four years). Follow her on Twitter @EvaKBartlett

A little over a decade ago, Syrians lived in safety and financial security. After ten years of war on Syria, while safety has largely returned, Syrians are struggling to exist under increasingly crippling Western sanctions.

When I first visited Syria in 2014, and in the years following, mortars and missiles fired from terrorist groups occupying eastern Ghouta pummeled Damascus on a daily basis. Likewise in government-controlled areas of Aleppo, and elsewhere around Syria.

Parents never knew if their children would return from school, or be shelled while at school. Untold numbers of Syrian civilians have been maimed over the past decade by such shelling, untold numbers more killed.

So one might expect that in 2021, with most of the terrorism in Syria eradicated, Syrians would have begun returning to the normal lives they had ten years prior. But the brutal sanctions have truly wrought hell on Syrians over the years, and under the latest ones, life has gotten exponentially worse.

Last year, I was in Syria for half of the year, after the borders closed due to Covid confusion. With ample time on my hands, I walked for hours around Damascus daily. One afternoon, wanting to get a good view of the city, I walked along narrow lanes going up the side of Qasioun mountain, encountering locals who spoke of community and supporting one another in hard times.

I had stopped to take a photo of the vista when a young girl’s voice called out to me. Shortly after, I was seated in her family’s humble sitting room, drinking cold water and talking with the family.

Only by chance did I learn that the father was ill with prostate cancer and suffering greatly for a want of affordable medications, increasingly difficult to get a hold of due to the sanctions. And that was in April, before the sadistically-named Caesar Syria Civilian Protection Act came into effect months later.

I say sadistically, because these sanctions, while ostensibly intended to target the Syrian government and its allies in order to punish and discourage supposed “war crimes” against civilians, in reality inflict endless misery on those same Syrian civilians. This is, as I wrote, something former US envoy for Syria, James Jeffrey, boasted about, reportedly saying that the sanctions “contributed to the collapse of the value of the Syrian pound.”

READ MORE: US sanctions are part of a multi-front war on Syria, and its long-suffering civilians are the main target

It’s a pattern we’ve already seen with Western sanctions – in Venezuela, they have not only made people’s lives hell, but as I also wrote, have killed up to 40,000 Venezuelans in the span of one year, according to the Center for Economic and Policy Research.

A recent guest article in the Financial Times addressed Syria’s ongoing (and orchestrated) economic crisis, with particular attention to the sanctions, noting that 60% of Syrians are suffering from food insecurity.

That number might actually be significantly higher, as in a July 2020 article detailing the illegality of the sanctions, the author cited 83% of the population living below the poverty line. That article noted, of the Caesar sanctions:

“Unlike the pre-existing sanctions, they apply to transactions anywhere in the world that engage the Syrian Government or certain sectors of the Syrian economy, even when those transactions have no connection to the United States.

“Such sanctions cripple a state’s economy; disrupt the availability of food, medicines, drinking water, and sanitation supplies; interfere with the functioning of health and education systems; and undermine people’s ability to work.”

These are not unintended effects – they are the whole idea.

The FT article notes that after the Caesar Act came into effect, the Syrian pound, “lost almost 70% of its value against the dollar in the following months. This spurred an inflationary spiral affecting food prices, which more than tripled in 2020.”

And, in contrast to how the US pretends to “protect” Syrians with these sanctions, the Caesar Act is, “severely affecting the local economy especially in the construction, energy, and financial sectors, blocking any possibility of reconstruction in this phase of lower-intensity conflict.”

Although I continued to follow events in Syria after leaving in late September 2020, when I returned in the last week of May this year, even I was surprised at the skyrocketed cost of basic things. About half a kilo of hummus that was 400 Syrian pounds last year is 2,200 now. At the current official exchange rate of 2,500 that’s slightly less than a dollar – but the average salary in Syria is around 50-60,000 Syrian pounds/month.

The FT article noted a kilogram of beef “costs about a quarter of a public employee’s average monthly salary. For perspective, in Italy this translates as €700 per kg. In the UK? £300 per lb.”

I chatted with a friend who has just one child. He described spending 15,000 (about $6) on vegetables, that would last several days. That’s a quarter of his salary gone, and many expenses still to pay.

In the Midan district of Damascus—an area usually brimming with shoppers coming for the famous sweet shops there, but not crowded the day I went—a cigarette vendor I spoke with described how he struggles to provide food for his wife and two sons. Like the majority of Syrians, selling cigarettes is a second job for him. Some are working three jobs, morning to late evening, and still can’t make ends meet.

He spoke of the self-sufficiency Syria had prior to the war, how everyone had work, but now, people are suffocating.

“Yesterday, I bought some yogurt, cheese, a box of mortadella (meat), and a box of tissues. I paid 11,000 Syrian pounds. This is for one day, and just breakfast.”

He said a dearth of fertilizers and insecticides, due to sanctions, is directly impacting the agricultural sector.

While in Damascus, I also met with French humanitarian, Pierre Le Corf, who has lived in Syria for six years, most of that time in Aleppo. Le Corf, working and living with some of the poorest and most affected Syrians in Aleppo, spoke of how the sanctions are designed to kill hope, in addition to killing civilians.

“You might not see people starving in the street, but that’s not what suffering is. People are suffering in silence. More and more, the youth are leaving the country, not because they want to leave Syria or feel oppressed, but because they feel that they have no hope anymore.

He spoke of the pressure the US puts on every company and person who deals with Syria, that they can be imprisoned, fined. “They are forcing companies to not work with Syria,” to isolate Syria.

“I know families for who I’m trying to figure out how to bring them medicines that they can’t find any more. A week ago, I went to bury a guy who we had been bringing medicine, because we couldn’t find it any more. It became 90,000 pounds a box, he needed four boxes a month. He needed more medicine and better treatment that we can’t have, because it’s forbidden. Forbidden why? Because they pretend it’s ‘double use’, maybe it could be used for the army. The people are paying the price, no one else.”

In an interview on Syria Insider, British journalist Vanessa Beeley condemned the sanctions against Syria, saying:

Sanctions are never ever non-lethal practises. They are almost the most lethal of all weapons used in the hybrid war against the people of a targeted nation.

In a recent, detailed, presentation focussing on the sanctions, Beeley highlighted their effects not only on incomes, food, medicines, but also on fuel, industry, agriculture, health care and hospitals, electricity and water.

She aptly noted: “One could argue that the US Coalition is responsible for genocide in Syria under Genocide Convention article II (e) – deliberately inflicting on the group, conditions of life calculated to bring about its physical destruction in whole or in part.”

In US President Joe Biden’s meeting with Russia’s Vladimir Putin today, perhaps among the scripted talking points there was tut tutting of Syria and Russia’s alleged preventing of humanitarian aid, a tired old trope debunked but still trumpeted by hypocrites in the West.

And while such integrity-devoid Western representatives launch accusation after accusation at Syria and Russia, it is abundantly clear that the suffering of Syrians is a product of the illegal war on Syria and the deadly, criminal, sanctions against the Syrian people.