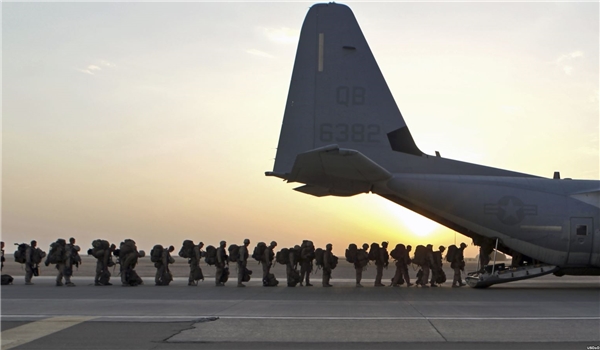 TEHRAN (FNA)- Luljeta Subasic, political activist, says unlike Iran and Russia, the US was never invited by Damascus to maintain Syria’s security.

In an exclusive interview with FNA, Luljeta Subasic cast doubt on the intention of Donald Trump, the US President, of pulling out the US troops from Syria, saying, “This is not the first time that Trump has stated that it’s time to come back home […] every single war in the Middle East waged by the US and its allies ever since 9/11 has still not come to a complete end.”

Luljeta Subasic is a New York-based political activist who travelled to Syria during and after the war. The focus of her writings is the Middle East, especially Syria and Yemen.

Below is the full text of the interview:

Q: Trump claimed that he intends to pull US forces out of Syria, saying “it is time to come back home.” Do you believe the US forces’ presence in Syria was justifiable from the beginning?

A: The presence of US forces in Syria has never been justified, nor will it ever be. The US-led coalition has been on the ground in Syria, illegally, with no invitation from Damascus, nor with any mandate from the UN Security Council.  Because Syria is a sovereign nation, Syria has the right to protect and defend itself from foreign invaders, which include any forces that have not been invited to Syria. Contrary to the beliefs of many, the presence of Russia and Iran, for example, is justified because they were invited. Many misunderstandings and lies promoted by mainstream media news sources would be shot down immediately if the majority of Westerners knew these simple facts.

Time and time again, we have seen the US, at the behest of its two biggest allies in the Middle East, Saudi Arabia and the illegitimate Zionist entity of Israel, ignore any and all international law, and without facing any consequences, to simply just do as it pleases.

This is not the first time that Trump has stated that “it’s time to come back home,” the question is, does he really mean it this time? We do not have any reference point to measure this statement against since every single war in the Middle East waged by the US and its allies ever since 9/11 has still not come to a complete end.

Q: Trump has said supporting the Kurdish militants has been “too costly”. Why do you think the US measures everything, including war, against costs and revenues?

A: Because Trump is first and foremost a businessman, of course he will make such a statement. Let’s keep in mind that whenever the joke of the Pentagon getting audited happens, nothing is ever found, ever. Trillions upon trillions of US taxpayer dollars go unaccounted for, every single time, in the name of waging war across the globe to promote the bogus ideals of “freedom and democracy.”

Throughout history, we have seen the US use and abuse of Kurdish militants to their own sick advantage, never following through on their promises to the separatist Kurdish militants. If I were a separatist Kurdish militant helping the US to secure its interests, namely, the theft of Syrian oil for the benefit of the illegitimate Zionist entity of Israel, I would be alarmed, and I would maybe even come to the conclusion that Trump must have found a more cost effective way to implement the same goals, but under a different strategy. People must be able to fully understand the war economy of the US and also analyze the history of its patterns in using certain ethnic groups to achieve its greater goals in order to be able to grasp such concepts.

Q: Considering that there has been no advancement in talks with either North Korea, or Iran, do you find returning forces home from Syria related to the 2020 US Presidential election?

A: Both North Korea and Iran have correctly rejected talks with the US in order to help maintain world peace, in my honest opinion. On the international stage, a belligerent bully and barking maniac that cannot be reasoned with is best ignored.

The notion of troops returning home is always a crowd pleaser to the majority of Americans who either have no idea about the realities of the illegal, illegitimate wars waged by the US, or, for the more awakened ones, do not want the US waging these war crimes in their names. We have seen examples recently of politicians on both the Republican and Democrat sides denouncing Trump for wanting to withdraw troops from Syria. These politicians do not represent the majority of Americans, so whether they realize it or not, they will not sway the average American citizen with their disgusting warmongering agendas. For the Americans that will vote in the upcoming elections, Trump knows that it is the average citizen who will re-elect him in the next election, not these politicians, so in a way, whether Trump means it or not, his statement on bringing the troops home is a maneuver for the 2020 election. It may even be a slightly redeeming value if he keeps his word this time.

What is happening in Palestine and the region? – Vanessa Beeley interview with Gordon Dimmack