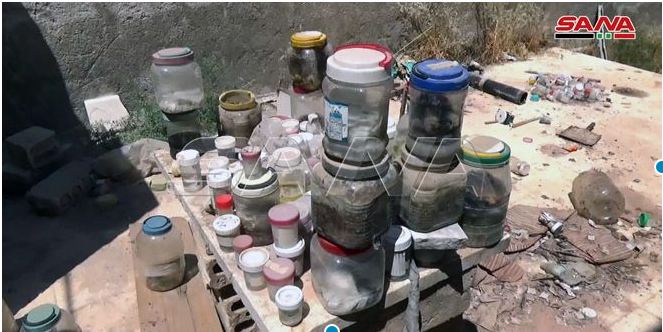 Idleb, SANA- Syrian Arab Army units found a large number of human organs preserved with “chloroform” material inside one of the terrorists’ hideouts in liberated village of Al-Ghadfa in Maarat al-Numan area, south of Idleb.

SANA reporter said that a doctor has transformed a house in al-Ghadfa village, about 10 km east of Maarat al-Numan, which was used by terrorist organizations as a hideout for them during their control upon the area, into a primitive medical laboratory, where a large number of transparent packages containing human organs, including a head, eyes, hearts, lungs, livers, kidneys and other viscera kept in chloroform solution were found.

The reporter stressed that the packages are marked with names for men and women, while there were records inside the house containing the names of people with a description of their health conditions and personal information about them .

The reporter added that one of the rooms in the house also contains a large number of pamphlets and religious books, with takfiri titles, which terrorist organizations usually use to mislead their members in order to carry out their hostile agendas.

The terrorist organizations have sought to steal human organs as a resource to finance their terrorist activities, especially in northern Syria.

18, 000 Syrian Children have had their Organs Harvested Over the Last 6 Years

Scientists Have Utterly Failed to Prove that the Coronavirus Fulfills Koch’s...

Footage from terrorists’ media of a child filmed launching an artillery...