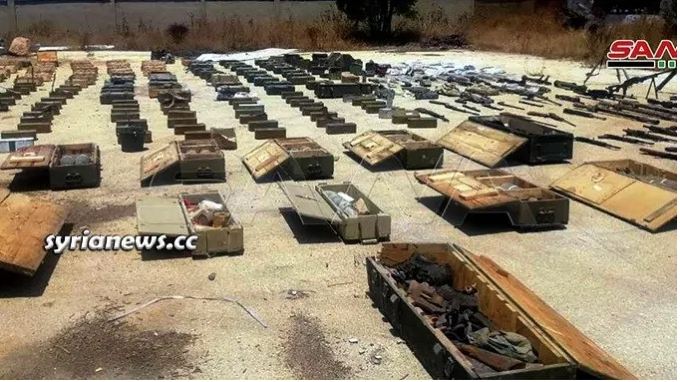 The law enforcement authorities discovered and confiscated a large quantity of weapons and munition heading to the NATO-sponsored Al Qaeda terrorists in Idlib.

In its ongoing intensive work and thanks to the ever-vigilant Syrian security personnel and with the help of locals, the law enforcement units in Homs monitoring smuggling networks found one of the storing places used by the smugglers at the Homs – Hama administrative borderline packed with a large number of assorted weapons and their munition on its route to terrorists in the Idlib province further in the northwest.

Just a week earlier on the 22nd of July, Syrian law enforcement authorities confiscated a shipment of a large number of weapons and munition heading to the terrorists in northern Idlib countryside. That shipment included mainly medium and light ammunition, machine guns, ammunition, RPGs, medium machine guns, and propellers.

Due to the huge quantities confiscated by the Syrian law enforcement agencies all over the country, the Syrian Arab Army’s engineering unit has to destroy the found quantities as it ran out of storage places. Weapons and munition need to be stored in specially-designated high-security depots. Almost weekly, the engineering corps carry out such a procedure to destroy these weapons all over the country, they also have to notify the public beforehand and make sure the destruction site is as much far as possible from residential or farming areas.

NATO terrorists do not only rely on the direct supply route they have with NATO member state Turkey providing them with personnel, weapons, and logistics essentials, they have a number of supply networks established during the years when they were controlling much larger territories throughout the country. Routes from Lebanon, from the open Syrian desert connecting with Iraq and Jordan in the east and south, and naturally through the very long borders with Turkey in the north.

Our question to the citizens of the NATO member alliance, especially when a country like Germany, the locomotive of the European economy, fails to pay its dues to the NATO alliance which lead to Trump withdrawing a big number of his forces from there, wouldn’t investing in more useful things in your own countries, say healthcare, education, infrastructure, research and development…etc., be more beneficial to you and your children than investing in these terrorist groups killing and maiming Syrians? Just think about it, weapons and also its munition are not cheap, let alone the billions spent by the Pentagon and each of the NATO war ministries from your tax money as part of their contribution to the invading and destruction of other countries.

“How come I do not have a father to hug me?”/Commentary by Sinan Shaibani, September, 2017.

27 US-Sponsored Terrorists Surrender to the SAA from Tanf Area/By Arabi...