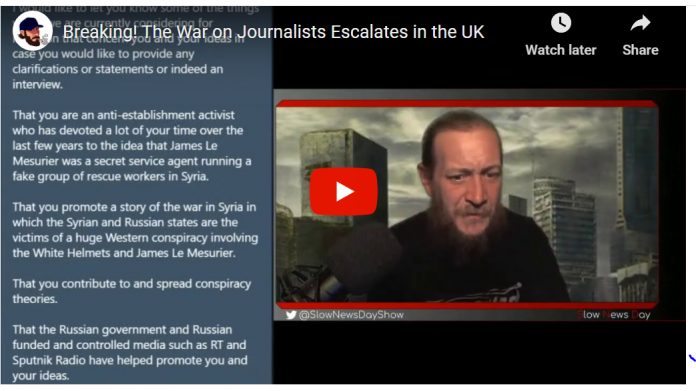 Video commentary from Steve Poikonen of Slow News Day – please do follow him and subscribe to his channel. Love his deadpan delivery.

Thread. I will be now going on the offensive. Press freedom is at stake. #Assange has set the dangerous precedent for treatement of journalists who expose UK/US war crimes, this must not be allowed to become the norm.

BBC hack is now threatening potential legal action against me for exposing #WhiteHelmets as #AlQaeda auxiliary. If WH are embedded wth terrorist organisation in occupied hospitals & involved in persecution of civilians, they make themselves a legit target for liberating forces.

2. I stand by my statements to that effect. This was threat fm BBC:   “That you call the White Helmets a ‘legit target’ in order to back the right of the Syrian and Russian military in their efforts to bomb them.” …..

3. “One lawyer who we have spoken to tells us that someone who spends time wth Syrian ministers & who is publicly calling 4 humanitarian workers to be bombed may be liable to face charges of aiding and abetting, inciting or conspiring to commit a crime under international law.”..

4. “This could appear to apply to you.  Do you have anything you wish to respond to this?” Her email includes:  “You promote story of the war in Syria in which the Syrian & Russian states are victims of a huge Western conspiracy involving the White Helmets & James Le Mesurier.”

5. “That you are an anti-establishment activist who has devoted a lot of your time over the last few years to the idea that James Le Mesurier was a secret service agent running a fake group of rescue workers in Syria.”

6. “That you contribute to and spread conspiracy theories.

That the Russian government and Russian funded and controlled media such as RT and Sputnik Radio have helped promote you and your ideas.”

7. “That the Syrian government has provided you with visas and state escorts and suggested places you could visit.” they do that for all journalists, including #BBC.   “That you were motivated by the suffering of children during your experiences in Gaza.”

8. “That you have expressed anti-Semitic views, including blog posts and images posted on social media.  That you see Britain as the corrupting force behind a lot of the horror in the world.”

10. “That you self-identify as a journalist although you have no formal training and do not conduct yourself with the rigour of a professional journalist.” LOL – rigour is obviously producing fake reports to manufacture consent for regime change war. Phew glad I dont measure up!

11. “That you have not contacted the White Helmets, Mayday Rescue or James Le Mesurier (when he was alive) and his family in order to check your facts or to get their response to your allegations about them.”   I interviewed #WhiteHelmets in #Syria.

12. “That you are pro-Assad, allow yourself to be used as a tool by & you promote the propaganda of Syrian government, turning a blind eye to human rights violations carried by Syrian military & that you give public talks as part of state sanctioned tours for visitors to Syria.”

13. “That you promote the propaganda of the Russian government.  That when questioned about whether you are paid by the Russian or Syrian states you have said that you are self-funded through the sale of your house. Do you have anything you wish to add to this?”

14. “That you have shifted your focus in recent months to *conspiracies* about Covid-19.” Sigh.

15. In one of my convos with hack Chloe, I asked her if she would be looking into #WhiteHelmet involvement with BBC Panorama “Saving Syria’s Children” hoax – she claimed it was not “big enough” & refused to.discuss. LOL.

16. In previous conversations with BBC

@bbclysedoucet I was told BBC would not consider looking into #WhiteHelmets because its too “polarising and controversial”.

17. BBC trending hack, Mike Wendley attacked me for investigating the #Douma chemical attack hoax, funny how there is silence from #BBC now I am vindicated by brave #OPCW experts who have spoken out about OPCW corruption and fraud.

19. Juliette Harkin, a former #BBC Media Action Project Manager – involved in destabilisation project #Syria ?:   “We [BBC Media Action] worked in 2004 with individuals within the ministry who wanted change and tried to get them to be the drivers of that. All media development work that has been done in Syria has, in my opinion, been predicated upon this idea that there can be change from within – you have an authoritarian regime and you find who the reformers are within that (individuals) and you work with them.”

20. Let us not forget that the US/UK coalition has deliberately targeted hospitals in every military campaign globally, including when it pulverised Raqqa, destroying hospitals because #ISIS. Did #BBC investigate this war crime and hold UK Government accountable?

23. Did Chloe Hadjimatheou work with ARK Group when she produced her #BBC “documentary” on #ISIS & “Raqqa Is Being Slaughtered Silently” group? Why is she so coy about answering very simple questions herself?

Bring it on #BBC – you might regret this attempt to white wash #AlQaeda who are the #WhiteHelmets. A legal case will allow me to present evidence.