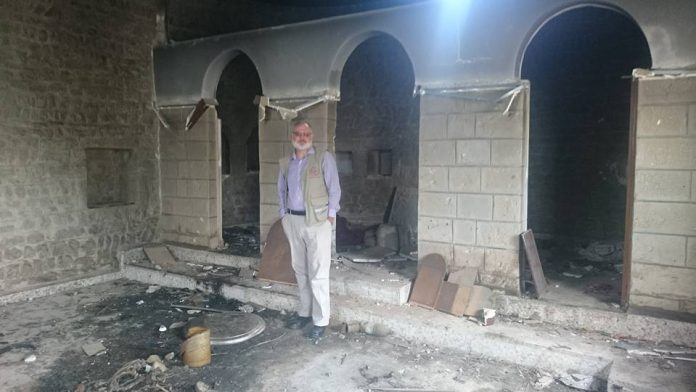 One of the first buildings you come across in Qasab is the remains of the Church. (This was a Christian village. The village was occupied in 2012 and destroyed as the terrorists were being driven back by the Syrian Arab Army 18 months ago. The Church is a poignant sight. The font and the altar has been smashed to pieces. Icons have either been destroyed or sold. The curtain veil to the sanctuary lies burned and dusty on the floor. It is a very poignant sight – and very real. On the outside walls are written in Arabic – ‘freedom’- ‘mosque’. I found my emotions welling up in the tragic silence… And a deep seething anger that the mixed terrorist groups who perpetrated this are still called ‘moderate’ by our government. Behold my friends, the face of ‘rebel’ ‘freedom’ and ‘democracy’.