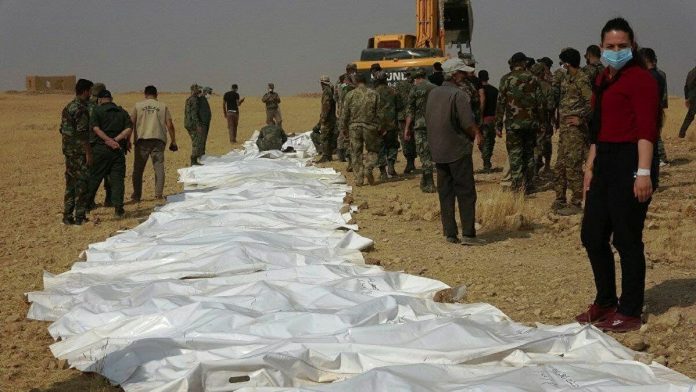 Bodies of 57 Syrian soldiers executed by ISIS terrorists 6 years ago, were found in Raqqa

Two mass graves containing the bodies of 57 Syrian soldiers, who were executed by ISIS terrorists 6 years ago, were found in Farhaneyeh town and in an area located near Tal al-Waheb town in Raqqa countryside.

The soldiers were executed when ISIS terrorists captured the headquarters of “Division No. 17″ and ” Brigade No. 93″ after heavy fighting with Syrian army’ s soldiers between July and August in 2014.

The bodies were transported to the Military Hospital in Aleppo.

Location of 2 more mass graves containing bodies of Syrian soldiers are identefied in Hazehem and Tal al-Samen towns in the same province [Raqqa] . The bodies will be dug up later.

Dutch Socialist Condemns Her Party’s Shameful “Dumb Monkey” Response to the Syrian War—Sadly Echoed Not Only by Corporate Media but Also Left-Wing Media/ By...