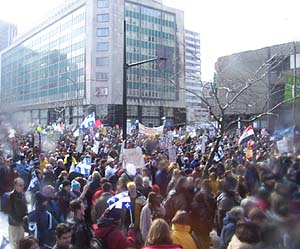 International lawyer David Jacob explains in an interview on the Taylor Report[2] that, first, Trudeau broke a promise (as per usual). In 2015 he promised that he would end Canada’s combat mission in Iraq and that there would be no direct involvement. Troops would be involved strictly in advise and assist roles.

Second, notes Jacob, the Canadian government is violating the National Defence Act by engaging in combat when we are not being attacked.

Third, NATO is not being attacked. NATO is the aggressor in Iraq.

Finally, issues of war and peace should pass first through Parliament.

There are good reasons to follow the rule of law in these matters. A compelling reason, totally ignored by mainstream agencies of indoctrination, is that Canada’s on-going, direct, illegal, aggressive warfare against non-belligerent nations (especially Libya, Syria, and Iraq), since September 11, 2001, amounts to war crimes and state terrorism.

In Libya and Syria especially, we are and have been supporting terrorists, including ISIS and al Qaeda. In Iraq we are directly involved in the destruction of the country’s territorial integrity and its sovereignty. In the Ukraine, we are supporting a neo-Nazi infested illegal coup government.

READ MORE: US-NATO Holocaust in Iraq: The Depopulation and Destruction of Mosul

These are war crimes, and none of this should be swept under the carpet.[3]

Canada is and has been directly involved in the commission of a modern-day holocaust. Dr. Gideon Polya explains in “An Iraqi Holocaust 2.7 Million Iraqi Dead From Violence Or War-imposed Deprivation” that “Holocaust is the destruction of a large number of people and 9 million Iraqi deaths from Anglo-American violence or violently-imposed deprivation certainly constitutes an Iraqi Holocaust.”

“The Anglo-American Iraqi Genocide since 1990 has been associated with 2 million under-5 year old infant deaths comprising 1.2 million (1990-2003) and 0.8 million (2003-2011), 90% avoidable and due to gross violation of Articles 55 and 56 of the Geneva Convention Relative to the Protection of Civilian Persons in Time of War which demand that an Occupier must supply their conquered Subjects with food and medical requisites to ‘the fullest extent of the means available to it’ [17]. The Iraqi Holocaust and Iraqi Genocide was also war criminal mass infanticide and mass paedocide.[4]”

Beneath the veneer of Trudeau’s “sunny ways”, the Canadian government is directly supporting an overseas holocaust. This should be front-page news.

The People Are Unaware of the War Being Conducted Against Them/...