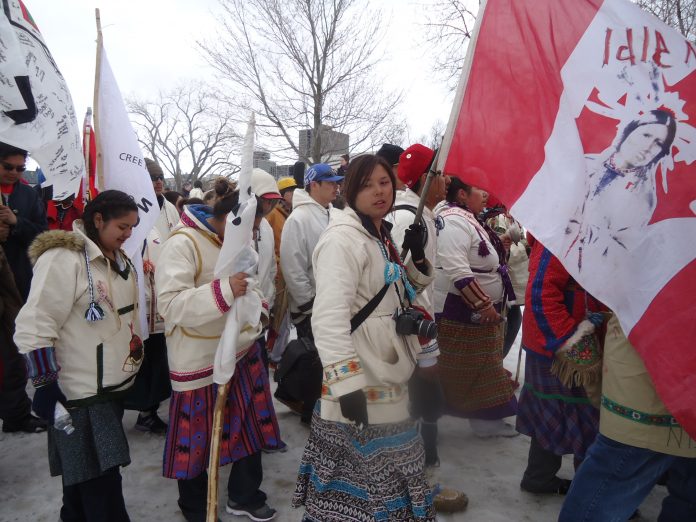 Canada’s relationship with First Nations peoples is a rapidly accelerating failure, borne of its contempt for international and national law, and an overarching moral weakness, outgrowths of its atrophied sense of self.

Selective historical amnesia (and the rewriting of history) urges us to forget that Tecumseh’s Confederation, allied with the British, successfully prevented the U.S. from annexing Canada during the War of 1812.

Manufactured amnesia urges us, as well, to minimize the importance of King George III’s Royal Proclamation of 1763 which proclaims the honour of the Crown to protect the aboriginal rights of its allies for “as long as the sun shines, the rivers flow, and the grass grows…”.

Internationally, we are also at cross-purposes with the United Nations, a core agency of world peace. According to the United Nations Declaration Of The Rights of Indigenous Peoples (UNDRIP), developments that might impact First Nations territories require the free, prior, informed, (and accommodated) consent (FPIC) of the First Nations involved.

More recently, with the passing of Omnibus Bills C-38 and C-45, the federal government denies and negates, (instead of recognizing and affirming), Section 35 of the Constitution Act, 1982 which outlines constitutionally enshrined treaty rights.

Despite these juridicial requirements, Canada repeatedly denies its social democratic Red Tory heritage as it repeatedly (and unsuccessfully) tries to assimilate First Nations peoples by denying their constitutionally enshrined rights and by abrogating the legal commitments which flow from these foundational documents.

A more recent example of the government’s efforts to deny its heritage — and to circumvent the law through federal legislation — would be Bill S-2. Dr. Pam Palmater characterizes the “Family Homes of Reserve and Matrimonial Interests or Rights Act” as an illegal government initiative intended to fragment reserves, and strengthen assimilationist trajectories.

On the ground, Canada’s denial and negation of both national and international law continue to poison the nation. Here is a snapshot of the symptoms:

* According to the CBC, First Nations students in Canada get from $2,000 to $3,000 less funding per year than off-reserve students.

* Canada spends $7,200 for essential services, on each First Nations individual, while non-aboriginal individuals receive $14,900, as well as provincial funding.

Notwithstanding the ethical failings of these funding disparities, even the economics of such misguided policies are a failure. Consider, as an example, that incarcerating an individual costs about $100,000 per year, while funding one year of university studies costs about $13,200.00 per year. Trajectories towards societal dysfunction are reinforced while productive trajectories are denied.

Given the self-perpetuating failures of the status quo, and the on-going governmental failures to adequately address (or admit) its failings, alternatives must be embraced.

Anthony James Hall’s Earth Into Property explains how the crisis of colonization enables poor governance that negates pluralism, as it reinforces the monoculture of monopoly capitalism. This negation of Canada’s pluralism (First Nations, French, English) is also a negation of this country’s heritage and its sense of self.

The alternative narrative as described by Hall is the “Fourth World.” In this model, the rule of law trumps the rule of force. Unlike today’s uneven application of international law where “Victor’s Law” predominates, in the Fourth World, “superpowers” would be judiciously subjected to the same laws and punishments as any other country.

Likewise, indigenous peoples throughout the world would be de-colonized in the sense that the rule of international and national law would be respected rather the denied and negated.

In such a world, legitimate negotiations — rather than unilateral pseudo-negotiations — would take place between Canada’s First Nations and the federal government.

Taken a step further, First Nations (locally as well as globally) would also negotiate internationally where their constitutionally enshrined rights overlapped the “rights” of corporate empowering “deals” such as the Foreign Investment Promotion and Protection Agreement (FIPPA) currently being negotiated with China.

A Fourth World paradigm would see a universal and enforceable “code of conduct” as well as a globalization of cultural (and biological) pluralism — trajectories that align with democracy. The current trajectories of monocultural corporate globalization — and its attending fascist-like rule — along with its “boom/bust” economic bailout cycles, would be neutered.

Given the very real threats facing the world, including catastrophic global warming, and economic collapse, one would think that the Fourth World narrative should at least be on the agenda.

President Assad of Syria tells the truth, for all who care to listen.

The walkers of Nishiyuu lead the way on journey that can...