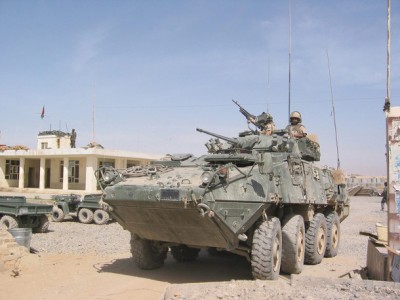 Canadians should be hanging their heads in shame.

Our government is guilty of the most egregious criminal acts as defined by Nuremberg Principles, and we are bona fide members of the State Sponsors of Terrorism club.

When our government bombs the sovereign state of Syria without the consent of President al-Assad and without United Nations Security Council approval, we are committing war crimes of the highest order.

When we support and fund foreign mercenary terrorists  that are invading Syria, we are state sponsors of terrorism. There are no “moderate” terrorists.  The mercenaries are all being paid and enabled by the West and its allies, including Turkey (a NATO member),Wahhabi Saudi Arabia, Qatar and Jordan.

On all counts we are guilty.  We are war criminals and state sponsors of terrorism.

The popular refrain that “Assad must go”, echoed by Canada Defense Minister, Harjit Sajjan, is in itself an endorsement of criminality.  Regime change operations are criminal according to international law.

A soft power complex that disseminates lies and confusion is seemingly sufficient to make gullible western audiences accept the criminality, even as the pretexts for previous illegal invasions invariably reveal themselves to be self-serving fabrications.

Hussein didn’t  have WMD, but  Western sanctions before the pre-meditated Iraq invasion willfully destroyed water treatment facilities and subsequently killed almost two million people, including about half a million children.

READ MORE: The “War On Terror” is America’s War Against The World: A Matrix of Lies and Deceit

Gaddafi wasn’t “bombing his own people” or destroying Libya. The West and its proxies did the killing. The illegal bombing in Libya – in support of al Qaeda ground troops– targeted and destroyed civilian infrastructure, including the Great Man-Made River Project. The bombs and the foreign terrorist ground troops killed Libyans, including Gadaffi, but Western propagandists and “confusion mongers” always portray an inverted version of reality to justify their atrocities.

Likewise for Assad – he is defending his country from foreign terrorists, not “killing his own people” – the Western invaders are killing Assad’s people.

Assad is not starving his own people either.  Recently the discredited Syrian Observatory for Human Rights (SOHR) fabricated a story that alleges that Assad was starving people in Madaya.  Evidence has recently emerged, however, that Western supported terrorists have been stockpiling food and selling it to civilians at exorbitant prices.  Again, Western military forces target civilians – with a view to killing and/or demoralizing them—for “strategic” purposes.  Vanessa Beeley decodes the intentional misrepresentation of the Madaya psy op. by listing investigative questions that should have been asked to find the truth, but were not.

War crimes perpetrated by the West are always dressed in mantles of respectability.  MSM spokespeople, all of whom have conflicts of interest, paint civilian murders as “collateral damage”. Some commentators use the phrase “collateral murder”, but more accurately the military doctrine of slaughtering civilians is mass murder.  The 9/11 wars are all pre-meditated,  the false pretexts are carefully manufactured by State Departments, Public Relations agencies (link), and intelligence agencies, and the mass murder is intentional. The 9/11 wars generate unforeseen developments, but the invasions and occupations were not and are not “mistakes”, as some commentators would have us believe.

Much of this evil aligns itself with Levy Strauss’ “Chaos Theory”.  NATO destroys, loots, and creates chaos so that it can impose its hegemony. Again, it’s an inversion of the ridiculous lie of “spreading democracy”.  The destruction also serves to create waves of refugees that serve to destabilize other countries — Europe is arguably being destabilized with a view to keeping the EU subservient to the U.S oligarch interests.  Interestingly, countries not being “sacrificed” include Israel and Wahhabi Saudi Arabia – and neither country is accepting refugees/ imperial crime victims either.

All of these pre-meditated invasions point to a larger picture.  Humanity is being sacrificed for the illusory benefit of the criminal 1% transnational oligarch class. If Western populations were to awaken to the barbaric crimes being perpetrated in their names, they would rightly bow their heads in shame.

The shame would be a strong foundation for shaking off the shackles of lies and war propaganda, and for withdrawing our consent to these crimes against humanity.

Mark Taliano is a retired high school teacher. Currently he is a writer and activist residing in the Niagara region.The original source of this article is Global Research Copyright © Mark Taliano, Global Research, 2016

Syrian Lawyers: (Caesar’s Law) is an international crime and targets the Syrian people with their livelihood Syrian policy July 08, 2020

The West’s Criminal Embargo Against Syria Collectively Punishes Syrians as it...

Coronavirus Fact-Check #4: “Why are so many healthcare workers dying?”/OffGuardian