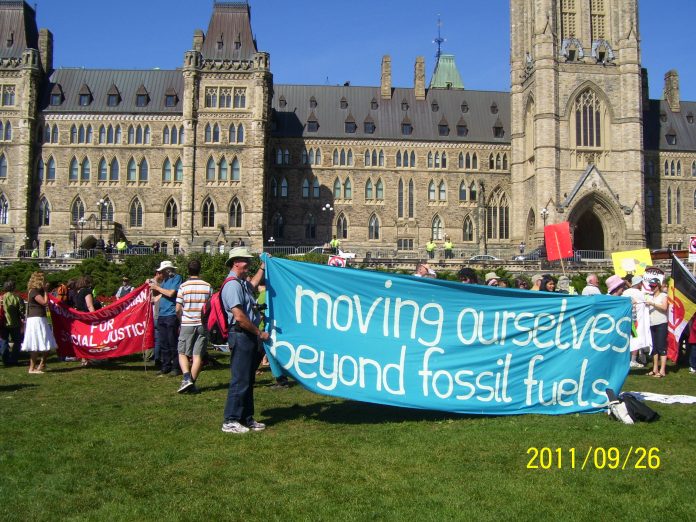 In his book ‘ Tar Sands: Dirty Oil and the Future’, Andrew Nikiforuk delineates the failings of Canada’s Tar Sands industry in the province of Alberta.  What follows is an abridged synopsis of the book and its message.  It is an important message to consider at a time when this country’s addiction to short term oil profits is compromising who we are as a nation.

Canada’s headlong rush into the exploitation of the planet’s dirtiest oil is emblematic of how not to exploit what could be a liberating resource.

Instead of transparently controlling and regulating this hydrocarbon as a base for a future low carbon economy, we are being controlled by its siren songs, much as a heroin addict is controlled by the illusory promises of his captor.

The physical characteristics of the industry look something like this.  First, the resource is not oil. It does not flow of its own accord.  It much more approximates a thick, black sand.  Transforming this “bitumen” to oil is extremely energy and resource intensive.  If the sand is first strip mined, it must then be liquefied using steaming water.  If the extraction is by the more difficult in situmethod, a mine must first be drilled, then steam pushed into the bottom, to melt the tar.  Either way, it is energy intensive. Unlike the oil that is extracted fromIraq’s killing fields, each barrel of bitumen requires three barrels of water from the Athabaska river. 90% of this water ends up in the world’s largest impoundments of toxic wastes, otherwise known as the “tailings ponds”.

Communities downstream of the leaking “ponds”, such as Fort Chipewyan, have a 30% increase in their cancer rates. It’s unlikely that you’ll see visitors to Fort Chip. drinking anything other than bottled water. If the water was flowing the other way, towards Fort McMurray, it’s certain that the water quality testing would be taken more seriously.

Each day, the tar sands industry burns enough natural gas to heat six millionhomes. And each day, it contributes untold amounts of green house gases to the atmosphere.  A barrel of bitumen produces three times as many green-house gases as a barrel of conventional oil.

Air monitoring, conducted by the Fort Air Partnership and Environment Canada is also third rate, with one expert, Donald Blake, explaining that the energy audits “reeked of cover-up and sleight of hand”.

The development regulations governing this industry are as corrupt as the health regulations.  The Energy Resources Conservation Board, largely funded by industry, approves almost all development applications submitted by industry (over 95% in 2006).  Typically, the board will assess a project’s environmental impact in these words: the project “is not likely to cause significant adverse environmental effects.” The reality is quite different.

When the tar is gone, and the energy companies have left (after a perfunctory “clean-up”), the real costs of “cleaning up” externalities will be left to the public (private profits, externalized losses), and even then it will be an impossible task.  Water deficits, coupled with increased average temperatures, will preclude the restoration of many areas to the filtering marshlands that previously existed. That being said, estimates are that an adequate clean up would still cost about two decades worth of royalties.

Some wishfully argue that technological advances will fix everything. Unfortunately, they’re wrong.  When energy companies find ways to decrease amounts of C02 produced per barrel of oil, they wipe out those savings by ramping up more oil production, thereby increasing the C02 produced.  Economists refer to the phenomenon as the Khazzoom Brooks Postulate.  It applies to cars and airplanes as well. Cars are more efficient, but we drive more cars. Airplanes burn 40% less fuel, but the industry has grown by 150%.

There’s even talk of building nuclear reactors to heat the tar, but reducing total energy consumption (and therefore limiting tar sands exploitation) is the only answer. Unfortunately, the governments ofAlbertaandCanadadon’t accept this reality.  AndCanadais already the world’s eighth largest emitter of GHG’s.

The economics of the tar sands are also a mess.  An average house inFort McMurraycosts about $600,000.00, wages are high, and taxes are low.  But theAlbertagovernment is still running a deficit of about $8 billion (2009).   Worse yet, the resultant high petro dollar is crippling manufacturing for the rest of the country. One reason given by the London ON Caterpillar plant for its shameful relocation to the U.S was the high Canadian dollar.

The tar sands give new meaning to the phrase “Open for Business”.  A 2007 panel, measuring the government’s share of industry oil revenues collected through royalties, found that of ten governments selling oil,Albertaranked last. Venezuelawas first at 89%, whileAlbertacollected a mere 39% of industry oil revenues.  To add insult to injury, the federal government is still subsidizing the tar sands.  The tar sands are more like an unregulated third world  “energy supermarket” than the “energy superpower” being touted by Prime Minister Harper.

One day, (hopefully sooner rather than later), extraction of tar sands will stop, and large swaths of the province may well look like a barren moonscape.  It was with this in mind that in 1976, formerAlbertapremier Peter Lougheed set up the Heritage Fund, where 30% of non-renewable resource revenue would be dedicated.   Unfortunately, subsequent governments stopped contributing to it, and Premier Klein used it as a poorly managed slush fund.

Norway was smarter.  They took Lougheed’s idea, set it up with stricter rules, and mandated that 94% of oil revenues would go to the fund.  Since 1990,Norway’s fund boasts a healthy balance of $330 billion.  The balance ofAlberta’s Heritage Fund is a mere $14 billion.

What, then, is an alternate narrative that might transform this dismal situation into something approaching progressivity?  Here are some ideas theCanadashould be considering, and debating (without closure) instead of plunging headlong into further high speed resource exploitation.

Cap production.  It should not be dictated by a “laissez faire” market approach.

Implement a carbon tax, with a 100 percent dividend.  (All proceeds to be returned to the public).

Re-establish a Sovereign Fund for petroleum revenues, and increase royalties.

Work towards energy sustainability by decreasing energy imports to Quebec and Atlantic Canada.

Orient rural and urban planning to low-carbon alternatives such as walkable communities.

Be proactive.  Don’t wait for the government to act.  “Power down.”

Re-negotiate NAFTA .  It is an impediment to sustainability , not only for Canada, but also for the U.S

“Slow down; behave like a resource owner, as opposed to a free market anarchist; charge higher royalties; save for the future, and develop only one project at a time so that environmental liabilities can be addressed in a proactive manner.”

Additionally, we would do well to consider Bishop Bouchard’s  (diocese of St.Paul, Alberta) advice:

He argued that the project should not be allowed to expand until the “integrity of the Athabaska watershed can be ‘safeguarded,’ the treaty rights of the aboriginal people have been honoured, and the country has developed a plan for alternate energy resources.”

In January, 2012, President Obama rejected a permit to allow the construction of the Keystone XL pipeline, which would transfer tar sands bitumen from northernAlbertato Gulf coast refineries.

More recently, U.S Republicans are trying again to force approval of Keystone XL through a pipeline provision in a Highway Bill.

Early Industrial Capitalism in the United States: Oppression, Expansionism and Internal Contradictions Excerpt from Chapter X of The # 7 Train Commuter’s History of...

Force Feeding Us On Genetically Engineered Food – Do You Want...