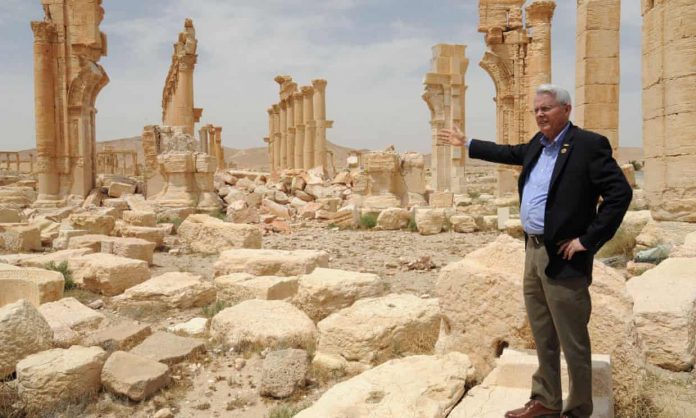 The civilized world should be celebrating the fact that Syria and its allies are on the cusp of defeating al-Qaeda terrorists in Syria.

If Canada, the West, and their allies conducted civilized foreign policies, they would be celebrating.

But we in the West are not civilized.  We support al Qaeda.

Senator Dick Black, reporting from the front lines in Syria, correctly assesses the current situation in these words:

“We have tens of thousands of terrorists who hold this last place and they have to be destroyed. It is for the Syrian army to destroy them and to try to protect civilians as much as possible. Many have already left via humanitarian corridors, many more want to get out ….

Just by looking around I will tell you that the Syrian armed forces are professional, they are highly trained and they are under orders to minimize civilian casualties. This is much different than the people on the other side. They are ordered to murder, to kill, to rape …” [1]

The position of the uncivilized, terrorist-supporting West and its allies consists of vacuous demonizations of the Syrian government, and fabricated rationales which serve to protect and sustain al-Qaeda.

Western policymakers seek to protect and resupply al Qaeda, as they have always done, through fake “humanitarian” political processes.

But imperial policymakers do not represent the people. We, the people, seek an end to al Qaeda and Western state-sponsored terrorism. Syria is rebuilding, and she needs to continue along this path. Humanity and civilization demand it.

Syria and its allies have proven themselves effective at combating terrorism.  They need to get the job done.

OK, well, we’re on the front line and this this is the dividing point between al-Qaida, which they call al Nusra. They keep changing the name, but it’s al-Qaida. This is the same group that attacked the Twin Towers on 9/11, killed 3000 Americans. They all they all burned to death or they leap from the Twin Towers a quarter of a mile down so that they could escape the flames. We have, we’re in a building, it’s a six story building, but it has very good observation. You can see here we have we have a soldier who is observing with the telescopic lens and it’s mounted up high so that it’s very difficult for snipers to hit him because he’s able to, he has a distance. He’s able to stay down low where he has some cover. We have organizations like this all through, all through the building. There are forts with, with soldiers ready to defend against the enemy.

The important thing to remember is that this is the dividing line right here. If you walk across the street, this is al-Qaida and the individual who is in charge of the entire army. The commander in chief is Al Julani, Al Julanii was a major commander in ISIS. He held in Anbar province in Iraq. And then he was elevated to where he is, the senior al-Qaida commander on earth. He commands the biggest terror army in the world. And this is, this is their final stand. This is their last place in Idlib province where they have been cornered and trapped. It should be a time when people in the United States and everyone who’s concerned about terrorism would be ecstatic. This is a wonderful time for us because we need revenge for what happened on 9/11. We have fought a war of terror for seven years with nothing to show for it. Well, 17 years it’s been and nothing to show. And yet here the Syrian army and their allies have cornered all of the terrorists in one place.

And, of course, there are many civilians who have been trapped there, used as human shields by the terrorists. And so this is this we have to liberate them. The Syrian army is very careful to limit civilian casualties. I’ve looked at the figures. Civilian casualties are remarkably low, considering the fact that we’re in urban combat. People die in urban combat. It’s a very brutal type of combat. We stand right now on a part of Aleppo that used to be held by a huge force of terrorists.

They were finally trapped and they tried to break out with hundreds and hundreds of tanks with thousands of men. It was one of the great battles of probably the great battle of the war. Today, they’re much diminished. And yet we have tens of thousands of terrorists who hold this last, this last refuge, this last place, and they have to be destroyed. And so it’s, it’s for the Syrian army to destroy them and at the same time to try to protect the civilians as much as possible.

They are trying to get the civilians out through humanitarian corridors. Actually, thousands of them have already gotten out. I’m sure many more want to get out. We’re here with with two of our generals, two of our brigadier generals who are in command of the forces here. I will tell you, just looking around, that the Syrian armed forces are professional, they’re highly trained, and they’re under orders to minimize civilian casualties. This is much different than the people on the other side. On the other side, they’re ordered to murder, to kill, to rape. This is, this is their policy. It comes down from on top is to is to kill the people. So we’re on the right side. This is a time when, when the civilized world should be celebrating because Al Julani is the head of all the rebel forces, all of them. So they are all al-Qaida. ISIS has a has a role to play there, one of one of the three major units of al-Qaida. There’s others, but they are all under the Central Command of Al Julani. The United States has a 10 million dollar bounty on the head of Al Julani because he is considered to be such a vile and vicious and horrible terrorist that this this bounty is there. Hopefully there will be some of the some of the Syrian army soldiers who can say, hey, you owe me, you owe me, ten million dollars. We’ll see whether the United States is willing to pay when the Syrians bring down Al Julani.

It is my personal hope that he is not captured. We don’t need a trial. We need we need for for them to be destroyed on the field of battle. But anyway we’re going to go around, we’re going to see some of the some of the Syrian soldiers, very courageous, very heroic. They have fought for seven years, going on eight years against two thirds of the military and industrial might of the world of the the enemy have been have been recruited from a 102 countries.

They are the worst of the worst terrorists, a slaughter they killed. They actually set up slave markets and they sell women. They sell little girls. Little girls bring the highest price for the terrorists. There’s nothing on the Syrian side. The Syrian army is very civilized. It acts appropriately and everything that it does. And so this will be the last great battle. Once this is done, I think that the Kurds will give up on on the idea that they will somehow dominate the, the northeast part of the country.

They’ll realize that the war is over at this point. So we’re going to go around today. We’re going to be talking with some of, the some of the Syrian soldiers or at least looking at them. We’ll get a better view where you can see out here and you can see enemy held territory right across the street. The street is a is a demarcation line. Here is the Syrian army. Over there is al-Qaida, al-Qaida, the very same people who brought down the Twin Towers and the Pentagon on 9/11. They’re out there and these men are going to bring them down. So thank you for listening. So you might take it,  you might take a picture out through the….