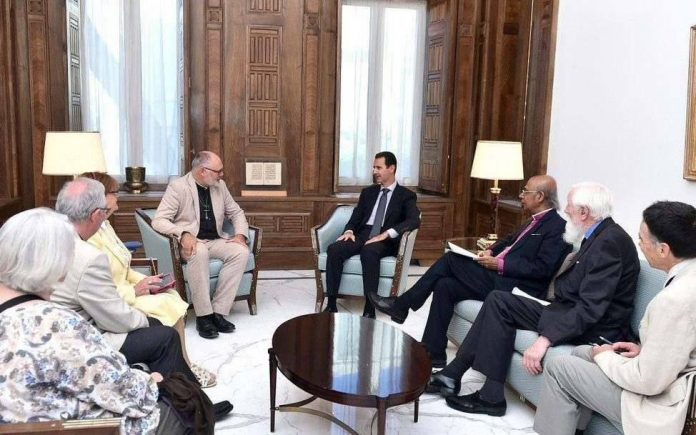 Since I wrote this post 3 years ago, the media (especially ‘The Times’) have continued to try to smear me. I have lost a job and been held at arm’s length by some in the Church establishment and by former ‘friends’ and colleagues, who have chosen to believe the media slander and lies. But I have also been been awarded a PhD for my Doctoral Research on Christian-Muslim relations in Syria which will soon be published by Routledge and distributed globally, and am very happily settled in the charity sector with a significant advocacy role, whilst continuing a priestly ministry. Meanwhile, an increasing number of senior politicians, military figures and Church leaders are recognising the futility and idiocy of British policy as regards Syria and much of the Middle East. But my primary motivation has never been a political one. It has always been, recognising complexity, to seek truth and understanding, through dialogue and engagement, in order to seek the common good and promote paths of peace rather than conflict. I believe this is a fundamental Christian principle. Despite the huge personal cost of this memorable and remarkable meeting, I still have no regrets and make no apology about it. It is a tragedy though that still, the blindness and stubborn bigotry of so many in the political and media spheres in the west, ensures the continuation of violence and the suffering of millions.

September 5, 2017  · A year ago today I had the privilege of meeting President Assad. It was an in-depth two hour open and honest meeting where many challenging subjects were discussed, and we were met with great courtesy. But, we were vilified for meeting him. BBC, ITV, and Channel 4 News all slated us. The Daily Telegraph, Daily Mail and Times all criticised us for meeting a ‘monster’. I was slated in the Church Times. And ever since, I have been put very much at arms length by the Church hierarchy and by my own Bishop. The fact that we met and brought messages from many religious leaders in Syria was ignored. But I have no regrets. And I make no apology to anyone for meeting the President. I am glad we did so. One year on, even Syria’s enemies are acknowledging that the President will stay, and are ending their support for the western-backed multiple Al-Qaeda linked terrorist groups who have brought such death, destruction and havoc to the country, and who are being defeated on all fronts by the Syrian Army with the help of Russia and Hezbollah. And wherever they are being defeated, a semblance of ‘normal’ life is returning to communities – and people are returning too. The progress in Aleppo particularly in the past months has been immense, and its citizens are clearly delighted and relieved to be free of the groups (that the west supported) that terrorised the city for so long. President Asssad’s personal popularity with a large majority of the Syrian people is immense. I hope and pray that a peace will be achieved soon. Peace has been so elusive partly because of the international community’s refusal to put aside their own agendas, to listen to the Syrian people, to stop fuelling the violence, and to engage the people who actually have power in the country. Healing will take much longer. But the will and the resilience of the Syrian people does make it possible. It is not up to us to dictate Syria’s future, and violence achieves nothing. If only we could accept that, and encourage a genuine process of dialogue, peace and reconciliation for the sake of the Syrian people. History has always proven that the path of peace has been achieved by talking, not by bombing! It is a shame that we have been vilified for talking – whilst other Church leaders and politicians have openly supported the path of bombing.