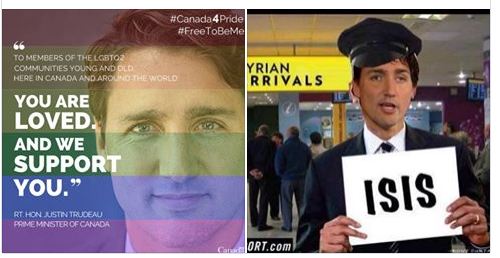 Canada has no honest leadership, period. Just scoundrels supporting the war on Syria, the zionists’ genocide of Palestine, the Saudi slaughter of Yemeni civilians, and otherwise towing the line of Imperialists.

Trudeau is perhaps the most absurd.

Explain how “reintegrating” ISIS terrorists is going to help the LGBT community he professes to support, let alone Canadian citizens in general? Any terrorist should be in prison, not in rehab…

So can the Prime Minister explain to the house exactly what kind of a program a reintegration service would look like for the people who commit these kinds of atrocities?”

That said, it must be said that Canada supported terrorism in Syria. From a December 2015 speech, Ken Stone points out:

“…in late 2011, the Harper government colluded with the US, UK, French, Saudi, Qatari, and other governments to organize, fund, and arm a covert war of aggression to overthrow the Assad government.

Using your tax dollars, Harper helped to unleash mainly non-Syrian terrorist mercenaries to invade and occupy huge swaths of Syrian territory. At the time, Harper and the mainstream media called the mainly-foreign terrorists “moderate Syrian rebels”. Harper brought their leaders to Ottawa, he funded them, he gave them political cover.

The Toronto Star published stories of brave young people going off to fight the evil monster Assad in Syria. CSIS and the RCMP turned a bind eye to these foreign fighters from Canada. Today, we know them as Al-Nusra, the official Al Qaeda franchise in Syria, which is now in competition in ruthlessness with its offshoot, ISIS….”
http://hamiltoncoalitiontostopthewar.ca/…/ken-stone-speaks…/

This despicable Canadian support of terrorism in Syria and issuing of war propaganda is not exclusive to these 2 parties. In fact, I believe the Green Party’s vitriol is perhaps more dangerous. Elizabeth May, as I wrote in March 2016:

“In employing the lexicon of the NATO axis’ propagandists, May is potentially more dangerous to Canadians than easily detestable politicians like Harper, Trudeau or Kinney, who are overtly supportive of the war on Syria. She is slyly misleading those Canadians less-versed on Syria into believing the same stereotypes and myths that confused many in the early months of 2011 but which have now been laid to rest. It’s time May lays her rhetoric to rest, and grows a political spine.”