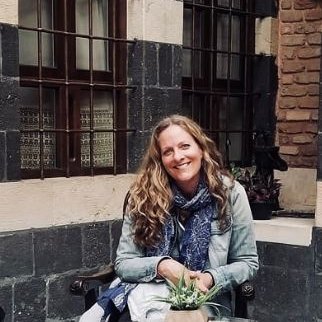 When in #Iraq, Abu Mehdi Al-Mohandes gave us two hours of his time inbetween battles. Two days later his men from Hashed al Shaabi were in Al Qaim to liberate it from ISIS.

This organisation and Al-Mohandes himself are both feared and denigrated by the US who perceive Hashed as a proxy of Iran in Iraq.

Hashed however work closely with the Iraqi government and army to cleanse Iraq of the US coalition sponsored terrorist entities, gathered under the banner of ISIS.

“The US did not supply a single bullet to fight ISIS” Mohandes told us.

“The US tanks had no ammunition. There were 12 Apache helicopters whose only mission was to evacuate US diplomats from the green zone in the event of ISIS succeeding in entering Baghdad”

When the Sinjar Mountain massacre and abduction of thousands of Yazidi men took place in August 2014, the US planes did nothing against ISIS. Only Iran, according to Al Mohandes, stepped up and prevented an even greater bloodbath, allowing Hashed forces to liberate 300,000 Yazidis.

According to Al Mohandes, the Iraqi Government, Hashed and Iran work side by side to defeat the ISIS terror threat.

Hashed al Shaabi have an impressive record for organisation. They have a dedicated media team whose “weapons are their cameras”.

“The young men in the media with Hashed, carry cameras instead of arms. Our social media army raises the morale of the fighting forces and play a pivotal role in changing public perception”

Hashed have an engineering team that is deployed to repair damaged infrastructure, bridges and roads. According to Al Mohandes, they are the most powerful intelligence agency in Iraq. They have established 8 mobile field hospitals, manned by surgeons and medical staff. Al Mohandes told us that an injured fighter is never more than 30 minutes from the nearest medical centre during a battle.

Hashd members are paid half the salary of the Iraqi police force.

When asked how the Sunni population will be reintegrated in Northern Iraq after ISIS is defeated, Mohandes replied:

“If you dont interact well with citizens you will have a repeat of the difficulties”.

“Our fight is for peace not for war” Mohandes said.

Many of the brigade leaders are Sunni now, Mohandes told us. The brigades consist of Yazidi, Sunni and Shia Turkmen, Arab Sunni, Christians and Kurds. Hardly the sectarian organisation that is much maligned by the US coalition and their aligned media. More than one third of Hashed forces are Sunni muslim.

In June 2014, Mohandes told us that Baghdad came close to being occupied by ISIS. The Iraqi army had lost a third of its capability. Hashed al Shaabi supported the Iraqi army and prevented disaster. Again in August 2014, Hashd fought side by side with the Iraqi Army and staved off the ISIS concentrated attacks against Erbil.

Mohandes believes that Hashed have strengthened the Iraqi Army and Police forces both morally and militarily.

When asked for a reaction to those who call Hashed al Shaabi a terrorist organisation, Mohandes smiled and said:

“Whoever describes Hashed as terrorists is simply incapable”.

Mohandes stated that political interaction in the region is actually very balanced, the only time it is destabilized is in the areas occupied by the US. In those areas, it is very hard to achieve the necessary balance.

“The main motivation of Hashed is their dedication to the betterment of the lives of others.” Mohandes told us.

According to Mohandes, Hashed Al Shaabi and the Iraqi Army compliment one another. The Army has an airforce, while Hashed have reconnaissance, construction teams and an impressive intelligence apparatus. Now, the Army cannot operate without Hashed and there is a clear belief that Hashed will be an intrinsic element in Iraq’s future anti-terrorism defence forces.

With regards to Syria and future unity in the region to combat the US coalition sponsored terrorism, Mohandes admitted that there is a degree of negative history between the countries dating back to the 2003-2012 period when Iraqi Baathists fled to Syria and established bases inside Syria according to Mohandes. These bases, he believes, then exported terrorists into Iraq. Despite these perceived differences, Mohandes maintains that Iraq did not succumb to US pressure to prevent the use of Iraqi airspace by Iran to enable them to give air support to the SAA in their fight against the multitude of US coalition financed & armed terrorist factions.

Hashed took the pragmatic view that if terrorism is allowed to flourish anywhere in the region, Baghdad would be in danger of being taken over by ISIS. He stated that there is military cooperation between Iraqi and Syrian forces in the north and south, on the borders. He believes that there remain 200km of Syrian/Iraqi borders to be secured.

In the future, he perceives the intelligence sharing between Iraq, Syria, Russia and Iran will be crucial to prevent any further rise of terrorism in the region. Mohandes believes in a future of greater cooperation between these four allies against the threat of externally fomented sectarian violence and terrorism.