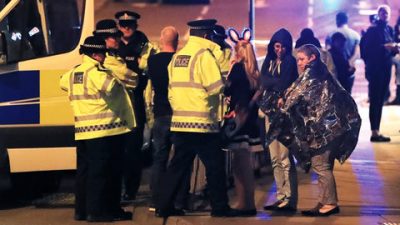 We shouldn’t be examining the Manchester bombing tragedy in isolation because we’ve seen all this before. While it is possible that the official explanation of what happened in Manchester, England on May 22, 2017 is correct, other possibilities should not be overlooked.

Dr. Graeme McQueen, author of The 2001 Anthrax Deception, argues that the prime suspects in transformative, domestic terror cases, should be intelligence agencies.

Naomi Klein argues in The Shock Doctrine that when people are shocked by a real or man-made event, they can be easily manipulated to support wars, or neoliberal market schemes, or any number of toxic agendas.

A simple formula underpins the logic of synthetic terror operations: problem, reaction, solution. An analysis within this framework would look like this:

The problem for the NATO warmongers is that their terrorist proxies in Syria are losing, and they need more military support.

The public reaction that the warmongers want to elicit is shock, and fear.

The engineered solution is the militarization of society, and a corporatist, warmongering government.

Currently, the U.K is being militarized, and an escalation of war on Syria is being proposed.

This solution to the problem makes no sense, but apparently the agencies tasked with indoctrinating the public seek to exploit the public’s shock and its suspension of common sense.

The twisted logic is that terrorism is the problem, so we should therefore support more terrorism in Syria and the problem go away.

Janice Kortkamp explains what the West’s support for terrorism in Syria has so far produced:

The alleged bomber was linked to al Qaeda forces that were NATO proxies in Libya as NATO criminally bombed that secular state into ruin for the benefit of terrorists.

Additionally, the alleged bomber has links to British intelligence services.

If the broad-based population were to decode the Manchester bombing within the aforementioned framework, common sense and reason would better inform their decisions.

Currently, common sense and reason are being suppressed by shock and panic …and the UK government.

Israel Tries To Brand Itself as a Peaceful, Democratic Oasis. Don’t...