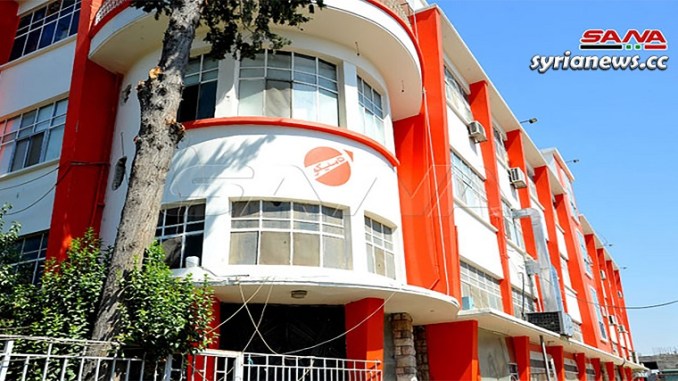 Thameco Pharmaceutical has begun domestic manufacturing of azithromycin as part of Syria’s fight against the COVID pandemic. Dr. Fida Ali, the company’s General Manager, made this exciting announcement in an interview with SANA.

Dr. Ali noted that Thameco has also been authorized by the government to increase production cetamol (acetaminophen), vitamin C, and other essential medications, supplements, and hand sanitizer in quantities required to meet the needs of the population.

Long time readers of Syria News may recognize the name, Thameco Pharmaceutical. It is the largest in Syria and in 2013, the NATO supported FSA terrorists bombed its warehouses in Eastern Ghouta, “to increase the suffering level on the Syrian people.”

Azithromycin is a macrolide that has been successfully used in the treatment of COVID. While it is well known by the layperson that antibiotics cannot cure viruses, the layperson has not been taught that viral and bacterial pathogens engage in cooperation to produce respiratory disease. Obliteration of the pathogenic bacterium helps to weaken the virus.

Thameco is working closely with an advisory team from Syria’s Ministry of Health in ensuring quantity and quality in production of protocol medications in the treatment of COVID in their country.

SANA also interviewed Samaya al Nin and Hussam El Din Hatahet, Head of Production, and Assistant Head of the Physical Laboratory, respectively. The two detailed how the COVID medications are made to the specifications of international standards, and how Thameco maintains quality control in all aspects of production.

As the numbers of COVID cases in Syria and the death tolls from this virus creep upward, and as the NATO hyenas at the United Nations continue to wail their crocodile tears over COVID in the S.A.R., one might think that the Thameco Pharmaceutical being able to manufacture an important antibiotic and increase the production of other essential medications would be cause for rejoicing.

For Google’s YouTube — the US-based, social media giant with the $15.15 billion revenue in 2019, the one that has recently taken to banning US-based licensed physicians for their discussions of coronavirus — found it cause for censorship, vaporizing SANA Arabic’s short video shortly after it was published.

For the record: YT has a very long history of anti-Syria bias, obliterating entire channels of Syrians who have provided English captions to videos provided by terrorists in Syria, terrorists on the formal terror lists of the US, EU, and UN, the videos by terrorists were not ‘censored’.

Syrian SAMA TV private channel aired a similar report in Arabic, we captured it before YouTube censored it:

Malicious censorship and the UN’s unwillingness to stand by its noble charter notwithstanding, Syria should be viewed by the world as a much-needed source of inspiration, particularly in the medical and engineering fields.

Prior to the COVID pandemic, while the entire country was besieged by terrorists armed and funded by NATO countries — the same countries that simultaneously imposed illicit, draconian, ‘sanctions‘ on the populace — Syrian physicians performed the first mitral valve replacement surgery in the region, performed the first successful artificial corneal transplant, successfully resected a retroperitoneal paraganglioma originally diagnosed as a gastrointestinal stromal tumor, and launched a ‘smart — osseointegrated prosthetics‘ program for children whose limbs had been blown off by IEDs.

In April, less than one month after the first COVID case in Syria, Syrian engineers and physicians worked together and built the country’s first ventilator, in sixteen days.

Throughout the millennia, foreign colonizers have attempted to crush the creativity and resilience of the Syrian people, lest they spread good will throughout the world.

Syrians will overcome this COVID crisis as they have overcome other crises throughout their very long history.

Please assist in supporting Syria News in the following ways: