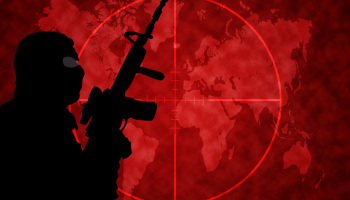 The Canadian government supports ISIS. So do U.S-led NATO, the Persian Gulf Tyrannies, including Wahhabi Saudi Arabia, and of course Apartheid Israel.

After six years of dirty war on Syria, this should be fairly obvious, but of course there is a complex web of propaganda agencies that obscure this fact.

Prof. Mohssen Massarrat explains in “The Fiction of ‘Fighting the Islamic State’, An Entity Created and Financed by the U.S. and Saudi Arabia” ( Global Research, September 2014) that

“(t)he U.S. neoconservatives have long been talking about a policy of ‘creative chaos’ in the Middle East. The ‘creativity’ of this chaos consists of the consolidation of U.S. hegemony in the region by causing area-wide instability and generating more ‘failed states’. Indeed, ethnic, religious, civil and cross-national wars carry the Middle East in that direction.”

The term “creative chaos” is a benign sounding name.  What it really means is mass slaughter and wholesale destruction of nations and peoples.

NATO’s terrorist proxies and its criminal airstrikes murder civilians, target infrastructure, including hospitals and schools, destroy the economy, and create chaos. This is what they want. “Going after ISIS” is a false pretext. ISIS, and all the terrorists infesting Syria advance NATO’s strategic interests of mass murder and destruction.

“ISIS occupied the areas flanking Syria and Iraq’s northern border. The U.S.-led coalition has had a presence in these territories for several years, without impairing ISIS control. At the right time, under U.S. cover, Kurds are moving in to ‘recapture’ them.

Kurds constitute a minority in all these governorates, which is how the presence of ISIS became a valuable U.S./Kurdish strategic asset. ISIS’s invasion of these areas is delineating the borders of the new entity and depopulating it—creating an opportunity for Washington to champion the Kurds as the primary ‘liberating’ force within those borders, after which Kurds can claim this territorial bounty.”

‘This is conquest masquerading as liberation,’ says Assyrian writer Max Joseph, who explains how KDP Peshmerga forces disarmed Assyrian Christians and Yezidis two weeks before ISIS invaded in August 2014, then retreated from their promise to protect those populations just as ISIS entered Sinjar and the Nineveh Plains.”

Similarly, although weapons shipments from the West to the terrorists have been well-documented for years, the West continues to use strategies to conceal its criminality.

A now declassified DoD audit reveals that the US army failed to keep track of $1 billion worth of military hardware in Iraq and Kuwait. Even Amnesty International, which has long-since discredited itself, and generally serves to advance imperial interests in Syria, admits that

“it makes for especially sobering reading given the long history of leakage of US arms to multiple armed groups committing atrocities in Iraq, including the armed group calling itself the Islamic State.”

Naturally, the US would deny that the armaments were intentionally delivered to ISIS and other terrorist groups, but this explanation lacks credibility since there already exists plenty of primary source evidence that the West arms the terrorists.

Despite the propaganda and the opaque military operations, it should be plain as day by now that the so-called “War On Terror” is a fraud that masks the West’s high crimes against international law, against civilization, and against humanity.

Axis of Resistance.The West and its Allies Support al Qaeda and...