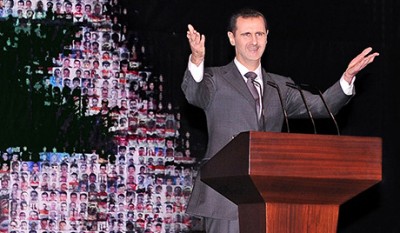 The terrorists are proxies for the West.

As soon as there were reports that Assad gassed his own people, the US launched Cruise missiles on Syrian military infrastructure. Proof was not necessary. In all likelihood, it was black propaganda, a false flag.

Why? Not only because NATO’s terrorists have a track record of using chemical weapons, but also because it ties in nicely with the “Weapons of Mass Destruction” meme that served the criminal war agenda against Iraq so well.

The West and its agencies always create false pretexts as preludes to expanding their criminal warmongering.

And these post-9/11 genocidal mass murdering wars are never about human rights either.  If they were, then the US would attack itself, and apartheid Israel, and Wahhabi Saudi Arabia, and all of the GCC dictatorships.

The false and criminal media coverage of the chemical weapons report was wedded to equally false coverage of a known and documented and proven tragedy where NATO terrorists willfully massacred  innocent men, women, and children fleeing terrorist-infested areas from Kafraya and al Fuah, and seeking refuge in government –secured areas. The reporting of the latter tragedy was false because the corporate media did not assign guilt to the known perpetrators.Mainstream War Propaganda. Embedded with the Terrorists

Latakia, Syria: April 20, 2017: I am an eye witness to the Syrian conflict which began in March 2011. I live in Syria, and no where else. I have been here 25 years and have friends and contacts all over Syria. I tell the truth. What I know to be a fact, because I live here and know the truth first hand, may sound strange to you, living thousands of miles away, being fed a daily dose of fake news. However, I would never tell you that I am an expert on the realities of your community, because I do not live there. Please do not doubt me, just because CNN fed you a different version of reality.

When the US backed ‘rebels’ massacred 100 people recently, many of whom were small kids looking for free potato chips, CNN reported the incident as a mystery, not blaming anyone. However, the gas attack previously was not a mystery, and CNN instantly knew who did it. Come on, stop puling my leg. You can believe lies, but I can not, because I know the truth.

Historical context is also important, but invariably omitted by corporate mainstream media messaging. The media would like us to believe that President Assad is the root of the problem, and that therefore, “he needs to go.”  But again, it is known and documented that the problem is not President Assad, but rather the willful, premeditated, criminal war that the West and its anti-democratic allies, and its barbarian proxies, are waging against Syria.

Syria was one of the most peaceful countries in the whole world. We had been living in harmony for many years under the authority of the same regime that the west powers are calling to overthrow it. What is called the Syrian revolution has just brought all fundamental and extremist Islamic fighters from all over the world to fight against the Syrian government and the secular identity of the country, worked as war agents and proxies for regional and world powers. As a result of that we have been living the most brutal and devastating war that our country has ever witnessed…..

Corporate media messaging about the war on Syria is not “mistaken”.  It is willful, criminal propaganda.Author: Mark Taliano

Not Going after ISIS, Killing Civilians as Military Doctrine