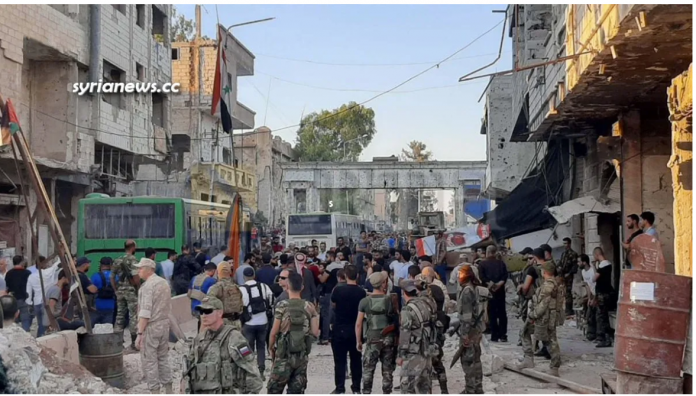 Daraa Balad, the southern neighborhood of the city of Daraa is about to be cleaned, this time for sure, after months of delays by the terrorist groups and their sponsors, the first batch of terrorists is already shipped to the north of Syria and arrived in Aleppo.

A reconciliation process mediated by the Russian Reconciliation Center was supposed to include a ceasefire, the evicting of up to 100 terrorists and their families from the city completely and be shipped to near their sponsor the Turkish madman Erdogan in the north of Syria, and the city restores calm and peace, former terrorists who joined the reconciliation will lay down their weapons and return to their normal lives.

During yesterday’s process, the first batch was supposed to include 10 of the commanders of the terrorists along with their families, they will be sent to the north of Syria by the iconic Syrian green buses used for all the previous terrorists across the country, however, 2 of the terrorists of ISIS didn’t show up, during the waiting, the terrorists holed up in the dense neighborhood started firing mortars and from their machineguns against the other neighborhoods in the city and against the Syrian Arab Army soldiers, 14 of which sustained injuries and were taken for treatment.

This is a compilation of video clips from the area showing the residents celebrating joyfully for finally being able to return to their homes as the terrorists are about to leave to find themselves under the fire of those terrorists:

Meanwhile, NATO member states have become increasingly hysteric over the imminent loss of their last foothold in the south of Syria, this will leave Biden forces along with an ISIS affiliate group in the remote Al Tanf region where they continue to hold hundreds of Syrian families in horrible conditions in the infamous Rukban concentration camp.

To help us continue, please visit the Donate page to donate or learn how you can help at no cost.
Follow us on Telegram: http://t.me/syupdates link will open the Telegram app.

The Long Overdue Cleaning of Daraa is Imminent, It’s About Time

Letter To The Editor by Sheila Ann Young

The US-NATO-Israel Sponsored Al Qaeda Insurgency in Syria. Who Was Behind...