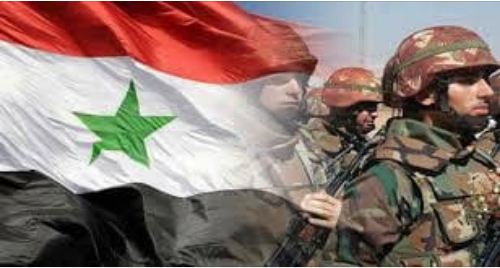 🔴At the beginning of the 1970s, the brave heroes of the Syrian Arab army (SAA) waged the October Liberation War which shattered the myth of the invincible Israeli army.

🔴Following the great victory in the October Liberation War, the Syrian Arab Army continued to play its pioneering role and offer sacrifices on the Lebanese territories to repel the Israeli invasion of Lebanon.

🔴Moreover, the Syrian Arab Army had been the main supporter of the Lebanese national resistance until the liberation of South Lebanon in 2000 reaching the humiliating Israeli defeat in 2006.

🔴Nowadays, the valiant men of the Syrian Arab army are fighting terrorism on behalf of the world.

🔴On its 75th foundation anniversary, the Syrian Arab army is more determined to press ahead in its battle against terrorism and its backers achieving a victory after another ,defeating takfiri terrorism, sponsored by Erdogan’s regime which is desperately trying to protect it.

🔴The battles launched by the Syrian Arab army against terrorism and its backers in the past few years are considered luminous landmarks in the history of the Syrian Arab army, especially the liberation of the cities of Aleppo, Deir Ezzour, vast areas of Homs and Hama countryside, Quneitra, Dara’a and Damascus Ghouta inflicting heavy human and material losses on terrorists.

🔴To complete national tasks, army units headed northward on October 13, 2019 to protect Syrian citizens against the evil practices of terrorist groups which committed ugly massacres against locals and destroyed the infrastructure. The army units liberated Al-Tabaqa Military airport and many villages in the countryside of Hasaka and Raqqa cities.

Western Regime-Change War Against Syria Did Not Turn out As Planned....