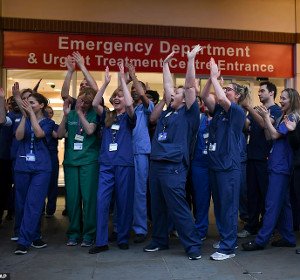 According to  The Daily Telegraph (May 21, 2020):  “samples taken from the same patient are being recorded as two separate tests in the Government’s official figures”.

“Tens of thousands of Covid-19 tests have been double-counted in the Government’s official tally, public health officials have admitted.”

“Diagnostic tests which involve taking saliva and nasal samples from the same patient are being counted as two tests, not one.

The Department of Health and Social Care and Public Health England each confirmed the double-counting. This inflates the daily reported diagnostic test numbers by over 20 per cent, with that proportion being much higher earlier on in the crisis before home test kits were added to the daily totals.”

This is not a “mistake” or “incompetence”.

It is a deliberate intent to falsify the data and inflate the number of positive cases with a view to sustaining the corona fear campaign.

It was much more than “tens of thousands” as reported by the British media. These are the figures: “Almost 350,000 more tests have been reported in Government data than people tested since the start of the pandemic.”

“The discrepancy is in large part explained by the practice of counting saliva and nasal samples for the same individual twice.”(Telegraph)

When did this start? And why did public health staff not speak out? Or were they instructed to shut up?

And who was in charge of instructing health staff  “to double count”. Will there be an inquiry?

Bear in mind that the “double counting” numbers are being used by the Boris Johnson government to maintain the lockdown and delay the reopening of the British economy. Not surprisingly, the UK has the largest number of so-called “confirmed cases” in Europe.

And now, England health officials are promoting “home test kits” which are said to be “reliable” and “accurate”. (And these are also included in the “confirmed cases”.

It is not the first time the Government has been caught massaging the testing data. It was accused last month of including thousands of home tests which had been posted but not completed in a bid to reach its target of 100,000 tests.”

During the H1N1 swine flu epidemic in 2009. the same health authorities in England processed data for so-called  “suspected cases” without conducting a lab test whereas in Scotland, the data was based on “confirmed cases” (lab testing),  For the same time period, the were 43  confirmed cases in Scotland versus 3906 in England a ratio of more than 1 to 9. I should mention that these fake (England) data provided the green light for mass vaccination in the UK by Glaxo Smith Kline which resulted in brain damages to children.

Lets not let it happen again. Say NO to the vaccine.

England is not alone in falsifying COVID data.

And health clinics receive a substantial amount of money from Medicare for each COVID-19 admission.

Double-counting is also practiced in the U.S. A recent report confirms that the State of Virginia is

“The new policy may serve to sharply drive up case numbers, which may in turn significantly delay the re-opening of the state.”  (emphasis added)

A single individual can be counted “positive” more than once, which also means  that the re-opening of the Virginia economy will be delayed as a result of the introduction of a timely “fake” data methodology which was initiated in early May.

More people unemployed. More companies on the verge of bankruptcy.

It is essential that physicians, epidemiologists and health workers Worldwide speak out and refute the statements of their governments which are acting on behalf of Big Pharma.

He Died of a Broken Heart

Chaos in UK Health Care. NHS Staff Are Being Silenced Over...