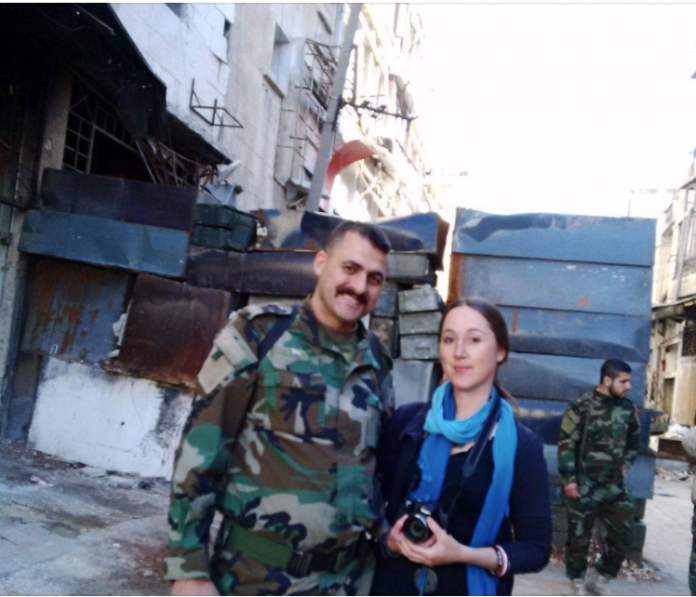 *most western journos who go here wear flak and helmets, a luxury I’ve never had, nor would I wear it when Syrian army brothers are not.*In the Old City of Aleppo the other day, going through areas at times dangerous due to potential snipings by terrorists the West still insists on calling “moderates”. The Syrian army, which western leaders and media miss no chance to vilify, are the protectors of Syria.

While walking in those risky points, Syrian soldiers always strode up beside me, to shield me. Same when visiting the Bustan al-Qasr humanitarian corridor yesterday morning where, again, the risk of being sniped by al-Qaeda in Syria and their affiliates just 200 metres away was high. *Incidentally, by the time we left around 10:30 or 11, the crossing had seen no one approach, let alone cross, from the areas where terrorists are holding civilians as human shields.

Same when in a building a little further away, high up and overlooking eastern Aleppo occupied by terrorists…at points when walking along an open corridor, a Syrian soldier or General would suddenly appear beside me till past the risk of being sniped.

There are many videos online showing Syria soldiers doing precisely this for Syrian civilians who managed to flee eastern Aleppo months ago, the soldiers putting their bodies between fleeing civilians and sniper fire.

How can anyone visit Aleppo, see the maimed and dead in just one afternoon which is like most days prior for the past 4 years, and then write about the “ruins” of buildings on the terrorist-occupied side with zero context, implying that the worst of the suffering is there, as have done some MSM journos recently,… It is beyond me. [On those murdered and maimed on Nov 3, 2016: “On the afternoon of Nov. 3, after meeting with Dr. Mohammed Batikh, director of Al-Razi Hospital, the victims of terror attacks which had begun a few hours prior began to arrive one after another, maimed and critically injured. The vehicle bombings and bombardment of Grad missiles, among other attacks, left 18 people dead and more than 200 injured, according to Dr. Zaher Hajo, the head of forensic medicine at Al-Razi Hospital. The corridors and emergency ward at Al-Razi Hospital, one of two state-run hospitals in Aleppo, quickly became clogged with the injured and grieving family members. In one crowded interior corridor, one of the wounded screamed out in pain: “Ya, Allah! Ya, Allah!””….CONTINUES: http://www.mintpressnews.com/aleppo-how-us-saudi…/222594/ ]

Context would be: terrorists have occupied areas from at least 4 years ago, bunkering deeply down. In fact, we got a glimpse of how prison rooms and torture cells were unharmed, 3 levels down, when visiting a so-called FSA (16th Brigades) prison for Syrian soldiers in Lairamoun.

In spite of the hits the building above-ground took, 3 stories down, the sordid prison was intact.

Seeing that, knowing that these terrorists are firing the variety of Grad missiles, gas canister and water heater bombs, mortars and explosive bullets, among other bombs, on civilians of government-secured Aleppo, how can one seriously write about the “ruins” of buildings in these areas where terrorists are bunkered down…Photos of the building in Lairamoun housing a prison for SAA soldiers. Last photo is a still from video I took down there, (https://www.facebook.com/EvaBoBeeva/posts/1350881308255193), and shows one of nine solitary confinement cells fabricated by the terrorists.

Is Hollywood about to award an Oscar to ‘For Sama’ –...