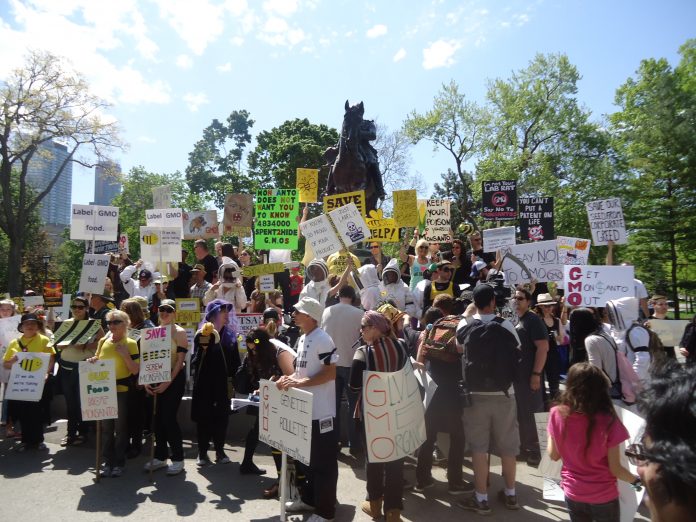 Monopoly capitalism is a particularly virulent strain of economics which is ascendant in today’s poltical environment of corporate empowerment deals that are robbing us of our economic and political self-determination as a nation.

An icon of this economy is the Monsanto company, which might better be named “Mon Satan”.

Monsanto’s roots are pesticides, with one of its most infamous products being Agent Orange — proclaimed to be “safe” for humans, which ultimately killed or disabled about 900,000people in Vietnam.

Monsanto also claims that its genetically engineered organisms (GMOs) are safe, even though the science of genetically inserting the DNA from one species to another is in its infancy.

Forcing the genes of one species into another is a method of creating a man-made organism for the proclaimed purposes of increasing crop yields by eliminated pests and other “externalities” that might impede crops. The on the ground results of this process, however, have been unpredictable and often toxic, as might be expected when premature scientific hypotheses are used to create products. For example, GMO consumption has been linked to infertility, cancer, autism, Parkinson’s disease, obesity, and diabetes.

There are also unforeseen “externalities” in the fields. So-called Round Up Ready crops contain pesticides in their genetic make-up which makes them resistant to pests, but now “Super bugs” have evolved.

The advent of “super bugs”, means that the industrial agriculture operations must then employ more toxic pesticides, and the toxic cycle continues.  Ultimately, soils are depleted, crops lose nutritional value, cattle are impacted, biodiversity is eradicated, and farmers become dependent on Monsanto.  Farmers must regularly buy more potent pesticides and herbicides, as well as GMO patented “terminator seeds” (genetically designed to be sterile by the second generation), which must then be re- purchased every year.

The creation of a dependent market means that Monsanto’s profits roll in, while farmers become more and more endebted to their toxic products, which ultimately become Corn Flakes and a myriad of other products sold at grocery stores.

In India, the problem of “debt slavery” related to Monsanto products is so acute, that it has reportedly contributed to the suicides of some 200,000 desolate farmers over the past ten years.

Money is power though, and Monsanto’s profit  margins are measured in the billions of dollars per year, and with these monies, the toxic cycle is perpetuated. They have armies of lobbyists, waves of media messaging, their own “tobacco scientists”, and control of institutional findings as a result of their donations, etc. The nexus of this influence, based upon imperfect science, is at once ubiquitous, and imperceptible, to its “target clients”.

The Federal And Drug Agency (FDA), which approves products in the US has basically become a lobby group for Monsanto, as Monsanto scientists become FDA scientists in a revolving door, crony capitalist process.  Recent examples of cronyism involving Monsanto would be Michael Taylor of the FDA, and Supreme Court Judge Clarence Thomas, both of whom have had close affiliations with Monsanto.

While many countries have a complete ban on GMO foods, such is not the case in North America.  In fact, the corporation’s tentacles are so powerful here, that not only are the products legal, but  they are protected by legislation which outlaws the labeling of GMO ingredients on retail food products —  Canada and the U.S are the only two countries in the industrialized world burdened with such restrictions.

Fortunately, there is much that can be done at the grassroots level to fight back against the evils of Monsanto’s monopolistic control over what we eat.

Here are some examples:

An informed population is likely the best defense against the perils of bio-tech companies such as Monsanto, and the webs of deceit that they weave.

The original source of this article is Niagara-At-Large