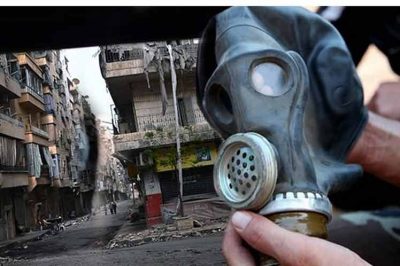 Vast flows of monies are transferred to the black hole of Pentagon spending – including trillions of “unaccounted for” dollars[1] — that should be spent productively, on sustainable Life-oriented economies rather than on Death-perpetuating diseconomies.

So, when BBC journalist Riam Dalati recently confirmed that the Douma hospital scene “was staged”[2], he was making an “admission against interest”, in the sense that his admission contradicts the colonial media storyline that “Assad was gassing his own people” again.

This admission should impact those who rely on colonial media war lies as their sources of disinformation.

The aftermath of the April 7, 2018 Douma false flag was consequential.  Shortly thereafter, the US, France, and the UK attacked Syria with over 100 terror missiles (BEFORE the OPCW had made an investigation) and the West’s ISIS proxies launched an attack from the Yarmouk camp, located 8 kilometers from the center of Damascus[3].

Fake atrocity stories have been a staple of war propagandists[4] throughout the Regime Change war on Syria, all with a view to falsely demonize the Syrian government and its President, and to serve as false “humanitarian” pretexts to commit Supreme International War Crimes.  Western agencies, including  White Helmet[5] terrorists, have played starring roles in these productions, and now the war propaganda transmission lines are openly fraying.

North Americans might now have an occasion to consider the years of real, primary source, independent evidence and investigations which have long since destroyed the cartoonish mainstream narratives, their fabricated “evidence”, and their humanitarian story lines.

[3] Mark Taliano, “Trump is Playing a “Dirty Game”? Report from Damascus at 4am at the Height of the Bombings.” Global Research, 14 April, 2018. (https://www.globalresearch.ca/trump-is-playing-a-dirty-game-report-from-damascus-at-4am-at-the-height-of-the-bombings/5636201) Accessed 15 February, 2019.

[5] Mark Taliano, “Video: Who Are the White Helmets? Fake News and Staged Rescues

Permanent War and Poverty. Acting on Behalf of Washington, the UN...