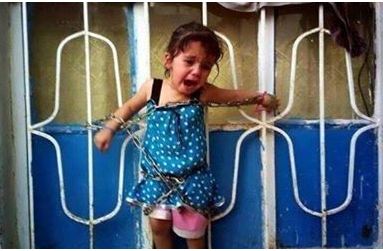 Americans often claim those words as our own. We like to go along with the rah-rah parade and pat ourselves on the backs for being the “good guys” fighting the “bad guys”.

But this is what we really have been doing. These photos are what American imposed-by-force “freedom and democracy” really looks like to the people on the receiving end.

This little girl was chained to that fence by US backed Free Syrian Army “moderate rebels” in 2013.

She was forced to watch her parents get tortured and executed. I believe she was then executed herself. Knowing what has been confirmed thru “rebel” terrorist videos filming and bragging about such atrocities, this story is probably true.

The other young lady was just killed a few days ago in a terrorist attack in Hama by “rebels”. She had survived over 6 years of this war and was planning her upcoming wedding.

So if it seems at times I’m not positive – I’m not – this is evil we are up to and there is nothing positive about it.

I’m sick to death of being told – “leave this country” – being called every name in the book – because I dare speak out against our greedy, arrogant, and ignorant government and military industrial complex.

But much more importantly, the Syrians are just plain sick of their loved ones dying.

So when you hear on the news or from government officials that we need to bring “freedom and democracy” to Iran or to North Korea or to some country you’ve never even heard of before – just know that if their lips are moving – they are lying.