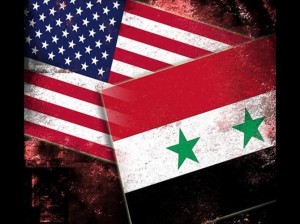 Genocidal corporate media presstitutes follow the all-too-familiar script of blaming the victim for the crimes perpetrated by aggressor nations.

NATO terrorists, for example, are invading and occupying Syria, and the Syria government is blamed for the ensuing disasters, but the presstitutes omit this this from their narratives and instead find creative ways to blame the al Assad government whose duty it is to protect Syria, its sovereignty, and its territorial integrity.  When terrorists are occupying cities, as they do in Syria, innocent people will always be victimized, including during government operations to clear out the terrorist infestations, but the presstitutes blame the Syrian government, not the NATO terrorists.

President Assad is fraudulently demonized for a war perpetrated by aggressors who are tasked with destroying Syria so the West can further the destruction under a fraudulent Responsibility To Protect (R2P) mandate, wherein criminal West promises to save Syrians from the West’s own terrorists.  It’s basically a mafia –style protection racket writ large:  If Assad steps down, we’ll “protect you” and replace him with a Wahhabi stooge government, and everyone will be happy.

The reality of course, is that if the Western terrorists win the war, Syria will be totally destroyed, much like Libya, Iraq, and the Ukraine.

The crimes of the aggressors have been well-documented for years, and all but ignored by the presstitutes.

A 2012 Defence Intelligence Agency (DIA) memo stated unequivocally that the U.S support for ISIS was  willful.  In an interview with Mehdi Hasan, MIchael T. Flynn, former director of the DIA, was blunt.

In 2012 the U.S. was helping coordinate arms transfers to those same groups [Salafists, Muslim Brotherhood, Al Qaeda in Iraq], why did you not stop that if you’re worried about the rise of quote-unquote Islamic extremists?

Flynn responded, “ I hate to say it’s not my job…but that…my job was to…was to to ensure that the accuracy of our intelligence that was being presented was as good as it could be.

The New York Times newspaper, another propaganda outlet, can’t help but reveal the truth, even if indirectly, when, in a recent article, “C.I.A. Arms for Syrian Rebels Supplied Black Market, Officials Say”it acknowledged that“ Weapons shipped into Jordan by the Central Intelligence Agency and Saudi Arabia  (were) intended for Syrian rebels.”Terror Junkies and the Paris Attacks: The ISIS and the West’s “Addiction” to Funding Radical Groups

(A)ll States shall: (a) Refrain from providing any form of support, active or passive, to entities or persons involved in terrorist acts, including by suppressing recruitment of members of terrorist groups and eliminating the supply of weapons to terrorists.

All of this evidence assigns guilt directly to the West for the disaster befalling Syria. The West’s actions contradict international law, and they expose the lies of the presstitute media that typically vilifies the Assad government rather than the real perpetrators (including themselves).

Yet another recent article, “U.S. Relies Heavily on Saudi Money to Support Syrian Rebels”,indicates that the West is also behind the financing of the terrorists.  The writers revel that,

When President Obama secretly authorized the Central Intelligence Agency to begin arming Syria’s embattled rebels in 2013, the spy agency knew it would have a willing partner to help pay for the covert operation. It was the same partner the C.I.A. has relied on for decades for money and discretion in far-off conflicts: the Kingdom of Saudi Arabia.

Add to this the fact that now Israel is publicly admitting that it prefers ISIS to the Syrian government, and we see that the presstitute narratives are falling apart yet again.

The false narrative, propagated about Syria was as dangerous to the Syrian people and the safety and security of Syrians as the terrorist acts perpetrated by terrorists because it isolated the reality in Syria from the public understanding in the West and the world at large and it prevented creating a level of understanding between western countries and the Syrian people about what is going on.

What will be the next story advanced by the genocidal media to account for the clear criminality of the West and its terrorists?

How many more thousands of innocent people will lose their lives because of the Western lies, and the grovelling presstitute media echo chambers covering for the criminality of the Western foreign policies?The original source of this article is Global ResearchCopyright © Mark Taliano, Global Research, 2016

Beyond a Reasonable Doubt. The “War on Terror” is a Fraud