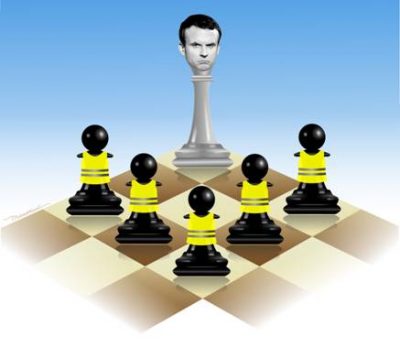 Consequently, we are being robbed blind, and our diseconomies are being further destroyed, for the benefit of Al Qaeda, and transnational oligarch classes. Truth is stranger than fiction.

The only glimmer of hope at the moment are the Gilets Jaunes[2] protests in France. Macron’s tax grab is all about serving imperial agendas at the expense not only of target countries, but also at the expense of a habitable planet, and a sustainable French economy as well.

Canadians spent over $32 billion[3] in 2017-2018 alone for a military that supports NATO’s globalizing, entirely toxic and supremely criminal agenda. Al Qaeda and like-minded terrorists in Syria have benefited for years thanks to our largesse.

Washington, Canada’s apparent role-model, spends about $1,000 billion per year[4]supporting a megalomaniacal project of World Conquest beneath a fake “War on Terror” mandate, spawn of a very transparent false flag neo-con coup on September 11, 2001. Again, terrorist proxies are benefiting thanks to U.S taxpayer largesse.

Taxpayer-funded agencies such as the UK-based Joint Threat Intelligence Group (JTIG)[5] are only too happy to comply with governing demands. Their mandate is to deny, disrupt, degrade, and deceive populations.

The endgame of these operations is to ensure population compliance with toxic agendas.

Consider briefly how populations have been deceived about the war on Syria.

Imperialists sold the lie that there were “moderate” terrorists in Syria. Intelligence agencies use these designated terrorists to transfer weapons and materiel from one group to another, for command and control purposes, and to create perceptions of legitimacy for terrorist-support and supreme international war crimes. People still believe the “moderate terrorist” lie.

Similar to the “moderate terrorist” lie is the “rebel” lie. The term “rebel” connotes “rebellion” or “revolution”, and has some positive connotations.  But the “revolution” in Syria was an imperial project since well before Day One.  Regime Change wars are not revolutions nor are they rebellions.

The term “Civil War” also serves to deceive. Regime change wars and their myriad strategies, including economic warfare, the infusion mercenary terrorists from over 100 countries — including special forces from imperialist countries — and criminal bombing of infrastructure, are not “civil” in any sense of the word.  But the deceptive nomenclature is effective all the same.Video: West’s War Against Syria Is Packed in Lies and Deceptions

False flag operations are also part of JTRIG tactics.  They occur on social media when operatives falsely attribute crimes or discreditable information to innocent people, but they also occur with regularity on the ground as well when operatives falsely accuse the democratically-elected, widely esteemed “brutal dictator” of committing massacres or gas attacks.

Presumably, well-informed populations would not support al Qaeda and like-minded terrorists in the first place, but they would certainly not support them if they realized that public monies would be better spent on productive, sustainable economies rather than on perennially bailed-out “neoliberal” diseconomies embraced by global “elites”.

The Gilets Jaunes represent a glimmer of hope and sanity in an otherwise insane world.

Featured image is from Massoud Nayeri

We Can Still See Their Blood: Beirut’s tragic blast recalls the...