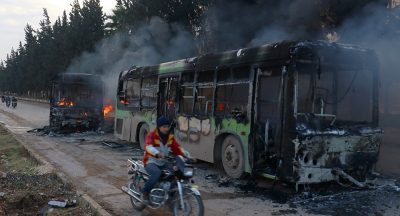 CIA stories are continuously shifting, but “going after ISIS” still seems to carry weight, so it is still used as a fake pretext to target civilians and destroy countries.

Syrians saw through the lies years ago. A recent article from SANA[1] media reports that the

“Foreign and Expatriates Ministry urged the UN Security Council to assume its responsibilities, maintain international peace and security, halt the alleged international coalition’s crimes against the Syrian people and oblige all states to abide by and implement all UNSC resolutions on counterterrorism, particularly resolution No. 2253.”

Clearly, the UN is failing in its mandate to maintain international peace, largely because it is increasingly subservient to rogue US-led “coalitions” that are literally responsible for an overseas holocaust.

But Syrians are aware. Amidst a tally of U.S perpetrated massacres on Syrian civilians, the Ministry accurately reports that

“terrorism could not grow without the unlimited support provided by the Coalition’s member states to the terrorist organizations, particularly the ISIS and Jabhat al-Nusra.”

The report also notes that,

“those attacks contributed to the spread of creative chaos, the killing and destruction which fulfill goals of the coalition and the terrorist organizations in destabilizing security in the region, destroying Syria’s capabilities and prolonging the crisis in a way that serves the interests of the Israeli entity.”

Chaos and mass destruction is not collateral damage, it is the strategic goal. Thierry Meyssanexplains it this way:

“(T)he simplest way to pillage the natural resources of a country over a long period is not to occupy the target, but destroy the state. Without a state, there can be no army. With no enemy army, there is no risk of defeat. Thus, the strategic goal of the US army and the alliance that it controls, the UNO, is exclusively the destruction of states. What then happens to the populations concerned is not Washington’s problem.”[4]

Everything makes sense when seen through this lens. Iraq, Libya, Ukraine, have been, or are in the process of being destroyed, so they can be plundered, and rendered subservient to Imperial diktats.

Massacring 40,000 civilians in Mosul was not a mistake, just like slaughtering over 500,000 Iraqi kids under five with pre-war sanctions was not a mistake. These are all strategic decisions.

“The “Liberation” of Mosul constitutes an extensive crime against humanity consisting in actively supporting the ISIS terrorists’ occupation of Mosul, and then waging an extensive bombing campaign to ‘liberate’ the city.”[5]

Martyred journalist Khaled Alkhateb was also aware of Washington’s criminality. In one of his last reports, before being killed by Washington’s terrorists, Alkhateb reported that the Coalition was attacking civilians, hospitals, schools, and food production in the Homs region.

The “Coalition” and its mercenary proxies have been doing this for almost seven years now.

Embassies need to be opened in Syria and beyond, the truth needs to be widely accepted, not ignored, and the carnage must stop.