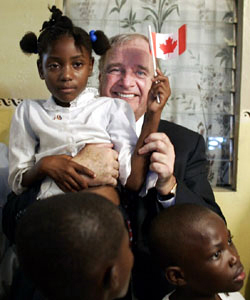 “Clearly, we need expanded guidelines for Security Council action to make clear our responsibility to act decisively to prevent humanity’s attack on humanity.  The “Responsibility to Protect” is one such guideline. It seeks rules to protect the innocent against appalling assaults on their life and dignity.  It does not bless unilateral action.  To the contrary, it stands for clear, multilaterally-agreed criteria on what the international community should do when civilians are at risk.”

These “expanded guidelines” as expressed by Martin, were later exploited to launch the criminal invasion of Libya, in which Canada played an important role.

Instead of “protecting the Libyan people”, the guidelines were used to attack the wealthiest nation in Africa, to support proxy ground forces (al-Qaeda), and to destroy the country.

The notion that Libyans needed “protection” was engineered through a campaign to demonize Libya’s leader, Mohammar Gaddafi. The West used an arsenal of evidence-free allegations, largely unchallenged by corporate media, to press its case.  Maximilian C. Forte lists the lies in “The Top Ten Myths in the War Against Libya” :

In reality, then, the R2P legislation served as a cover to enable the inversion of its professed goal.  Instead of protecting Libya and Libyans, it destroyed both.Human Rights, Corruption and the Canada-Honduras Free Trade Agreement: The Assassination of Activist Berta Caceres

Abayomi Azikiwe reports in “Libya War Continues Three Years After Gaddafi Assassination”  that the demise of the Jamahiriya-Gaddafi rule has resulted in “on-going destabilization, with warring factions battling for control.”

the status quo and too often empty rhetoric must make way here for a new and pragmatic multilateralism measured by concrete results, not simply by promises. Our citizens want security, based on international law. They want opportunity, based on more effective aid. They want empowerment, based on respect for human rights.

This statement, too, has proven prophetic, in the sense that Canada is still practicing the opposite to what it proclaims to do.

Canada’s disregard for international law and order Canadian was also in full view when it supported the Canada-Honduras Free Trade deal not long after the democratically-elected Zelaya government was deposed by an illegal, Washington-orchestrated coup. The author wrote in “Why Canada and the U.S. are on the ‘Wrong Side of Democracy’ “:

Living conditions in Honduras have gone from bad to worse since the democratically elected president Manuel Zelaya was ousted by a military coup in 2009. The rupture of democratic governance has set Honduras back decades,

Hondurans have experienced increased levels of violence since the coup and unprecedented levels of murder and criminalization of politicians, human rights advocates, labor activists, journalists and indigenous leaders.

In fact, assassins recently murdered Honduran indigenous leader Berta Caceres, one of numerous murders that in all likelihood would not have occurred had it not been for the illegal coup, orchestrated  by Washington.

Canada’s complicity in the “destabilisation” of Honduras is best illustrated through its ratification of the  “Canada-Honduras Economic Growth and Prosperity Act”.

On March 31, 2014, Member of Parliament (MP) Alex Atamanenko, of British Columbia Southern Interior, BC, explained the duplicity of ratifying the agreement:

Mr. Speaker, let me be clear. There are three fundamentally important criteria for assessing the merits of trade agreements.

First, does the proposed partner respect democracy, human rights, adequate labour and environmental standards, and Canadian values? If there are challenges in these regards, is the partner on a positive trajectory toward these goals?

Second, is the proposed partner’s economy of significant or strategic value to Canada?

Third, are the terms of the proposed agreement satisfactory?

Canada’s foreign policy duplicity is also inherent in its support another illegal government:  that of the neo-Nazi infested regime, offspring of the Western-orchestrated coup that deposed the elected government of  President Yanuyovch.  George Freidman, founder and CEO of   Stratfor intelligence described the coup as “the most overt coup in history.”

Clearly, Canada’s humanitarian proclamations are hollow facades engineered to fool Canadians into thinking that we have a benevolent foreign policy, even as evidence demonstrates the opposite.

Increasingly, our elected governments are ruling through lies and deceptions; the consent that they are engineering is not informed consent.  “Democracy” and Canada’s current political economy flow in opposite directions.The original source of this article is Global ResearchCopyright © Mark Taliano, Global Research, 2016

27 US-Sponsored Terrorists Surrender to the SAA from Tanf Area/By Arabi...

French diplomat Michel Raimbaud, “Beyond the pandemic, geopolitics as usual”...