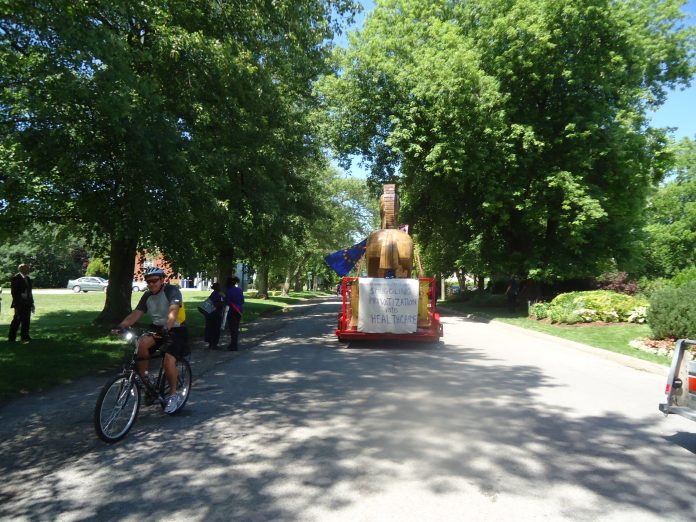 For some time now, opponents to equitable, universal health care have been smearing proponents of Canada’s “signature” social program, Medicare, by using a corporate “communications” strategy known as “FUD,” which stands for Fear Uncertainty Doubt.

Potter explains that the CIGNA insurance company tried to undermine Moore by portraying his as a communist, or a socialist, and as someone who was trying to undermine the American Dream.

Since a universal health care program would save American lives and give many more Americans the liberty to strive for the mythical American Dream, the tactic seems counter-intuitive.

However, the appeal to emotions is a very powerful strategy. For decades, the advertising industry has successfully associated cigarette smoking, (and a multitude of other products,) with “freedom,” and other abstractions. People not only “buy” the messages, but they buy the products as well.

Similar Psy-Ops strategies are being employed in Canada under the Harper reign.

Proponents of trajectories towards corporate health care insinuate that we can no longer afford universality, that it isn’t sustainable, that corporations can deliver better health care, that the “free” market can solve our problems, and that those who oppose corporate health care are, god forbid, “socialists” — typical FUD fare: manufacture fear, uncertainty, and doubt to undemocratically impose an agenda.

Unfortunately for Canadians, each of these accusations is baseless, (except maybe the last one) and the covert agenda is not supported by the will of the people. Eighty-six per cent of Canadians support publicly-funded health care.

The agenda is being achieved by starving the provinces of required funding. Once the 2014 Health Accord is expired, the Harper government will reduce its Canada Health Transfers (CHT’s), — monies transferred from the federal government to the provinces – by$36 billion, up to the end of 2024.

The void of insufficient funding will be filled by corporate health care.

Once this is achieved, Canadians’ access to health care will be restricted, user fees will increase, insurance coverage will cost more, and patient fatalities will rise in number.

Here are some numbers.

According to the Canadian Institute for Health Information, public health care costs less than $180 per month per Canadian, while a private insurer in the U.S. charges three times that amount for comparable service.

Even worse, according to a study by Dr. P.J. Devereaux, and published in the Canadian Medical Association Journal, if we switch to for-profit hospitals, over 2,000 more Canadians will die needlessly each year.

What are the drivers behind this agenda which is contrary to the wishes of about 86 per cent of Canadians?

According to the Council Of Canadians (who must surely be on Harper’s “enemy list”) there are three drivers:

– Private investors, many based in the U.S, who want to cash in on Canadian health care (NAFTA guarantees equal treatment to U.S companies competing against our public system.)

The alternatives to this ideologically-driven agenda are fairly straightforward.

First, we need a nationalized pharmacare program. Canada is the only OECD country with universal health insurance that does not cover prescription drugs. Canada would save about $10.7 billion per year with a universal public drug plan.

Second, we need to stop the Comprehensive Economic And Trade Agreement (CETA) with Europe. Under this corporate empowerment deal, the price of pharmaceutical drugs will rise by $3 billion annually.

Unfortunately, the better alternatives will not materialize under the Harper regime, but with grassroots pressure, damages to our health care system might at least be minimized.

The original source of this article is Rabble.caCopyright © Mark Taliano, Rabble.ca, 2019

Are COVID-19 Death Certificates Being Manipulated? A Conversation with Dr. Annie...

Lightning Flashes in the Dark Night of War Propaganda

“I am carrying a message saying that our wounds are the...

Where Is The Collective Will To Stop Privatization Of Canada’s World-Class...

‘Expensive, Inefficient, and Inequitable’ For-Profit Health Care Has No Place In...