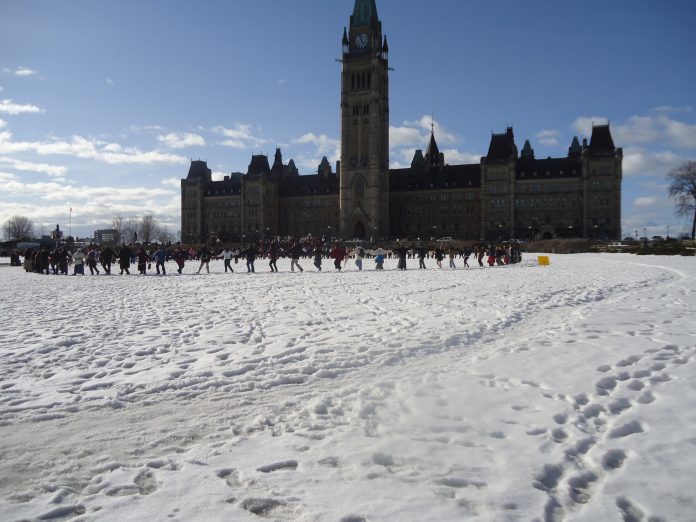 A small polity of First Nations peoples, the Hupacasath, could be the only obstacle to stop the ratification of what may well be the most devastating corporate empowerment treaty that this country will ever endure. And most Canadians, by design, know nothing about it.

In June, 2013, the 300-strong Hupacasath First Nation launched a court action with the Federal Court to stop ratification of the proposed 31-year trade treaty. The Chief Justice of the Federal Court presided over the hearings, and a decision will be made by the end of August, or in early September.

The Foreign Investment Promotion and Investment Agreement (FIPPA), signed in Russia, is a bilateral investment treaty that abrogates international and constitutional law, and essentially hijacks municipal, provincial, territorial, and federal laws that threaten the profitability of Chinese State Owned Enterprises (SOE).fingerprintLearn more about the Nuu Chah Nulth and hundreds of other Indigenous Peoples around the world

A treaty as momentous in its import should merit open discussion, but instead, it has been cloaked in secrecy, which is consistent with the treaty itself. According to the treaty, if a Canadian law threatens the profits of a Chinese SOE, a secret tribunal, consisting of three arbitrators, and operating outside the jurisdiction of Canadian law, will adjudicate and award penalties, should it deem that profits have been compromised.

If, for example, a Canadian environmental regulation negatively impacts a Chinese SOE’s extractive industry, then the Chinese company can sue for lost profits.

The secretive treaty has not even been ratified, and it has already negatively impacted Canadian legislation. Likely, the federal government’s evisceration of environmental laws as spelled out in Bills C-38, and C-45, was an effort to appease Chinese “investors.”

Should the treaty become ratified, it will also likely suppress any further efforts to reclaim federal oversight of environmental protections, since legislators will legitimately fear a lawsuit: the Chinese enterprises will be protected by a treaty that effectively supersedes Canadian laws.

Basically, China’s corporate reach will be extended further into Canada, and our municipal, provincial, territorial, First Nations, and federal legislators will have their hands tied.

Despite the treaty’s benign sounding name, it’s more of a “protection” treaty, (of China’s rules) than a “promotion” treaty. It does not “promote” trade by reducing tariffs for Canadian businesses, and most of the “trade” in capital will be flowing in to Canada, rather than out from Canada to China.

Other countries with strong resource bases, including Australia and Brazil, have refused the compromises inherent in such a treaty, but Canada appears to be less inclined to preserve its sovereignty, possibly for ideological “free market” reasons.

Gus Van Harten, Associate Professor at Osgoode Hall Law School, has comprehensively countered the Harper government spin. Van Harten’s rebuttals to some of the government’s “talking points” on FIPPA include:

– Instead of promoting growth, the treaty may undermine growth by removing value-added benefits from Canada’s resource sector.

– The treaty’s main role is to protect Chinese-owned assets from Canadian legislatures, governments, and courts, and vice versa (i.e corporate empowerment), though it is largely non-reciprocal since China’s interests/capital will be (and currently are) far greater than Canada’s current or anticipated investments in China.

– Regulatory differences between the two countries will create an uneven playing field as well. Canadian investors will have fewer protections from discriminatory treatment in China, since China’s existing legal frameworks are opaque relative to Canada’s (remaining) legal frameworks.

– There is also a huge disparity of capital flows, with most capital flowing in to Canada from China, so treaty protections are mostly one-sided.

– An Independent Commission has not studied the treaty, so Canadians are unaware of projected costs and benefits.

Even more important than the lop-sided nature of the treaty details, however, is that it reinforces and accelerates Canada’s current trajectory towards international lawlessness.

According to the Royal Proclamation, 1763, the Canadian Constitution, 1982, and the United Nations Declaration of the Rights of Indigenous Peoples (UNDRIP), prior consent and accommodation must be secured from First Nations peoples where there is overlap between, in this case, the corporate rights of a bilateral trade agreement and Aboriginal title, rights, and treaty rights.

The Hupacasath First Nation, with the support of Serpent River, Tsawwassen First Nations, UBCIC, and Chiefs of Ontario, launched its court action for these stated reasons:fingerprintSee other indigenous struggles in Canada

– the federal government failed to consult with First Nations which breaches Aboriginal title, rights and treaty rights enshrined in the Canadian Constitution, Section 35;

– if ratified, FIPPA may allow the development of tar sands pipelines through First Nations’ traditional and sacred territories by China state-owned companies;

– this FIPPA is being made with a foreign country on un-ceded lands where treaties have not been settled with First Nations;

– environmental standards gutted by Bills C-38 and C-45 may never be restored due to provisions in the FIPPA which impede first Nations’ rights to protect resources for future generations;

– FIPPA was negotiated in secret by the Conservative federal government and would handcuff Canada for 31 years.

The treaty is more than “NAFTA on steroids”; it might be more aptly described as an icon of the Harper government’s debasement of both Canadian and international values.

First Nations: Why an Apology is Wrong, and Deceptive: Bringing Humanity to Bear on the Residential School Atrocity/ By Kevin Annett

First Nations: Why an Apology is Wrong, and Deceptive: Bringing Humanity...