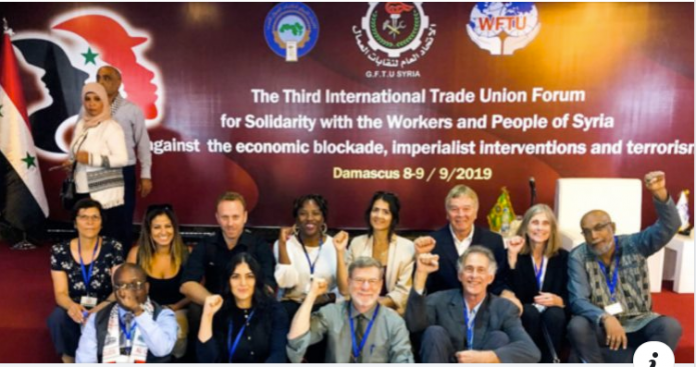 On July 11, the United Nations Security Council passed a resolution presented by Germany and Belgium that would permit one border crossing from Turkey into Syria’s Idlib province for a US- backed UNSC aid program. The United States has been battling with China and Russia for a resolution increasing the number of gateways for cross-border aid from Turkey from two to four since January 2020 when two crossings were approved on a temporary basis. The July 11 decision for one crossing at Bab al Hawa has been universally lamented in the US and Western mainstream press as inadequate, as a failure forced on the council by Russian and Chinese meanness and obduracy. On the 9th of July a similar resolution for two crossings was vetoed by Russia and China.  Following this vote, Amnesty International headlined their response: “Russia and China launch despicable veto of lifesaving aid for millions of civilians in Syria”. (Amnesty International, 7/8/20)

The Syria Solidarity Movement supports the Russian and Chinese positions on aid to Syria and calls out the attacks on those two Security Council members by the Western mainstream media and by Amnesty International as hypocritical.

Following the successful vote on July 11, there was a round of recriminations in the Security Council, with the United States, Belgium and Germany denouncing the Russians and Chinese for blocking aid to “innocent Syrians” while the Russians and Chinese responded with their concerns. The Russians, who have personnel on the ground in Idlib, complained that the UN does not actually have a presence in the area, but rather the aid is passed to an assortment of Al Qaeda and Turkish-backed militants who currently govern there, who then may or may not provide it to the civilians. The ambassador suggested the aid could be more appropriately coordinated in partnership with the Syrian government, which has been fighting for a decade to restore its sovereignty over all of its national territory. The Chinese ambassador said that China is fine even with four cross-border gateways but said his country insists on addressing the needs of the Syrian people in a holistic manner. In this light, the first priority of the Security Council would be to lift Western economic sanctions so that all Syrians could receive the desperately-needed aid.

According to Syrian authorities, before the US-backed regime change war on Syria, there were twenty-three million people residing there. Today, the number is closer to fifteen million. Many of these people are internally-displaced persons. Since Idlib is the last active war zone in Syria, the population is likely less than 1 million, including the Al Qaeda, the Turkish-backed fighters and the Uyghur migrants resettled there by Turkey. Over and over, western politicians and the Western mainstream media refer to the people who reside in Idlib as “The Syrian People“, as if there were no other Syrians. It is true that most of the people in Idlib are Syrians but also true that most Syrians live somewhere else in the country. In fact, most of the original population of Idlib live elsewhere at present.

While the US and its allies strike poses of righteous indignation and blame their Russian and Chinese colleagues for heartlessness, they refuse to acknowledge the reality that their program, in its best capacity, is meant to provide meager assistance to a small portion of the Syrian population who are essentially hostages of the terrorist proxies who control Idlib on behalf of their US and Turkish masters. They have spent months negotiating this detail while the holistic picture of Syrians deteriorates under the burden of US-imposed sanctions.

Moreover, after the police killing of George Floyd and police brutality against Black Lives Matter protesters in the USA, it’s utterly hypocritical that the US has the gall to lecture other countries about heartlessness and human rights.

“It’s impossible to overstate the importance of ensuring the crossing points, delivering vital aid, stay open. For millions of Syrians, it is the difference between having food to eat and starving. For hospitals, it is about having enough supplies to save lives. That’s why Russia and China’s abuse of the veto power is despicable and dangerous.” (Amnesty International, 7/8/20)

The hypocrisy of this stance is stunning. The UN aid-through-Idlib program never affected more than a few hundred thousand people. Let it be noted that there are many open crossings between Turkey and Idlib, though, through which all kinds of materials flow. Existing US aid programs are not restricted to that single crossing between Turkey and Idlib.

Meanwhile, Amnesty has not once complained about the despicable unilateral coercive measures that are crushing the Syrian economy and leaving the millions of Syrians everywhere in the country without food and medicine. The Syrian people as a whole have endured ten years of war instigated by the imperialist powers. Is Amnesty not concerned about the suffering of the Syrians throughout the war-torn country? Or, do only the terrorists and their hostages qualify as ‘Syrians’?

How is the US helping the desperate millions in Syria? They want to control several border crossings which are controlled on the other side by militants. Aside from food and medicine, what else might they want to send through their portals? The US and its allies have been arming those same militants since before the regime change operation began in 2011. The US wants as many gateways as possible open from Turkey into the terrorist-controlled Idlib province so they will have maximum influence there. In effect, the US wishes to weaponize “aid.”

Again hypocritically, the US controls two UN refugee camps in Syria’s eastern provinces. Both are desperately lacking supplies for their residents and plagued by local militias unlike the camps in government controlled Syria which are secure and provisioned.

The US has placed Syria under illegal unilateral sanctions (not approved by the UN Security Council) designed to destroy its currency and crush its economy. The people of Syria – all of Syria – are going without food and medicine while their currency has been enormously deflated in value as a direct result of a decade of unilateral coercive measures, now capped by the punishing “Caesar Sanctions”, all enforced by the USA which now has the audacity to accuse Russia and China of “meanness.” US proxies burned the wheat fields in Eastern Syria, destroying the harvest while US soldiers are sitting on half of Syria’s oil fields. And, at this moment, the Empire threatens to embargo any ship that attempts to bring oil to Syria to heat Syrians’ homes for the coming winter.

The US insists on pursuing this course and routinely punishes any other state which dares to defy its illegal sanctions on Syria. US allies, such as Canada, Arab monarchies, and EU countries, follow along like a dog pack, barking when the big dog barks, retreating when he turns his bark on them. Meanwhile, Western mainstream media and so-called humanitarian NGOs, such as Amnesty International, are trying to shame Russia and China for wanting to deliver aid in coordination with the sovereign Syrian government and to see an end to unilateral coercive measures that are destroying the economy of Syria and causing immeasurable suffering for ordinary Syrians.

No one should be taken in by such hypocrisy.

*Featured Image: Members of Syria Solidarity Movement with friends at a Labor Conference to address the issue of Sanctions in Damascus in September 2019

Syria Solidarity Movement is an international organization based in the United States.  SSM seeks to support the Syrian people by providing information through the SSM website and statements, and through providing humanitarian aid inside of Syria.    SSM stands in solidarity with the people of Syria and supports their right to sovereignty and self governance, and an end to the vicious imperialist war perpetrated on them over the last decade.