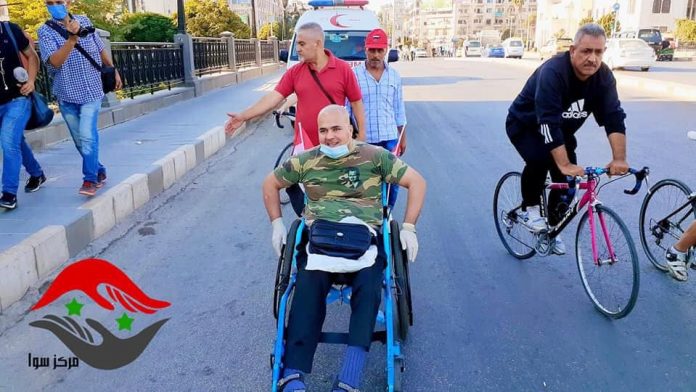 Today, war-wounded veteran Ghaiath al-Dayoub who has a degree of disability of 90% started his 2nd initiative to show his support to the Syrian Arab Army (#SAA).

The military veteran is determined to undertake a 137 km journey from #Hama municipality building to the city of #Aleppo.

Al-Dayoub who wants to make a dent said, “I am carrying a message saying that our wounds are the key to our resilience and our victory.”

He added, “The blood of the Syrian martyrs and the wounded is responsible for re-opening Hama-Aleppo road (#M5)and breaking the #siege imposed on the innocent people of Aleppo.”

The veteran was paralyzed in his lower limbs as a result of a severe injury he sustained while fighting the terrorists in Aleppo Governorate.

In 2018, he spent 5 days rolling his wheelchair from the city of Hama to the Umayyad Square in the city of #Damascus, during which he traveled 200 km (nearly 125 miles).

Hama, described by pathetic MSM war propagandists as “the stronghold of the Muslim Brotherhood”