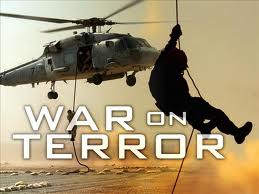 Unsuspecting citizens are paying for a nexus of interlocking agencies that conspire to create terror, war, and police-state legislation in a War of Deception that serves to devastate humanity.

Without its arsenal of fabricated war pretexts, and its fabricated Fear apparatus, the warmongering oligarchy would be denuded and reveal itself as the mass-murdering terrorist entity that it is.

Most recently, in Canada, Justice Catherine Bruce disclosed the true nature of an RCMP terror plot when she overturned terror convictions against two patsies – John Nuttal and Amanda Korody – who were set up by police operatives to commit a terrorist act for which they would otherwise be totally incapable of performing.

Bruce stated the obvious when she observed that,

“Simply put, the world has enough terrorists. We do not need the police to create more out of marginalized people who have neither the capacity nor sufficient motivation to do it themselves.”

The “forbidden truth” is that agencies of Canada’s federal government created a false flag terror event with a view to:

Unsuspecting, otherwise peace-loving citizens, are also being duped into paying for Private Intelligence Contractors (PICS) who receive lucrative government contracts to engage in a full spectrum of activities designed to create and sustain war crimes.

“Science Application International Corporation (SAIC) is likely the largest (and least known) PIC, with a huge staff (about 40,000 in 2007, likely more now), and it is fully integrated into the War Machine.”

Donald L. Bartlett and James B. Steele report in “Washington’s $ Billion Shadow,” that

‘SAIC’s friends in Washington are everywhere, and play on all sides; the connections are tightly interlocked. To cite just one example: Robert M. Gates, the new secretary of defense, whose confirmation hearings lasted all of a day, is a former member of SAIC’s  board of directors …’ “

The U.S. government, through its incestuous relationship with SAIC, effectively created false intelligence – with impunity —as a fabricated pretext to wage the illegal war of aggression against Iraq.

A memo from “Veterans intelligence Professionals for Sanity” (VIPS) indicated that,

“some of our former co-workers are telling us, categorically, that contrary to the claims of your administration, the most reliable intelligence shows that Bashar al-Assad was NOT responsible for the chemical incident that killed and injured Syrian civilians on August 21, and that British intelligence officials also know this. In writing this brief report, we choose to assume that you have not been fully informed because your advisers decided to afford you the opportunity for what is commonly known as ‘plausible denial.’ “

The CIA specializes in the commission of crimes beneath which the protective shield of “plausible deniability” can be invoked should suspicions of CIA complicity be aroused.

Professor Tim Anderson and others also demonstrate, with sustainable evidence, that the East Ghouta gas attack was false flag terrorism.

The Pentagon’s use of PICS to perpetrate war crimes is now becoming normalized.  According to Kate Brannen in “Spies-for-Hire Now at War in Syria”, the Pentagon publicly disclosed the terms of a contract with a PIC called Six3 Intelligence Solutions to provide “intelligence analysis services” in a number of countries, but most notably, Syria.  The public may not be aware that such an intervention in Syria is illegal, or that Six3 Intelligence Solutions has a proven track record as interrogators at the Abu Ghraib torture chambers, or that it will no doubt offer the CIA plenty of “plausible deniability” to perpetrate crimes with impunity.

Whereas the government and its agencies should be using our tax dollars to “create no harm”, and to further the cause of peace and prosperity, it is clear beyond any reasonable doubt that governing agencies are creating much harm, through stealth and deception, thanks to the steady flow of tax dollars streaming into its coffers.

Libya And The Lies Of Empire, February, 2015

Tim Anderson ‘There is zero credible evidence that the Syrian Arab...