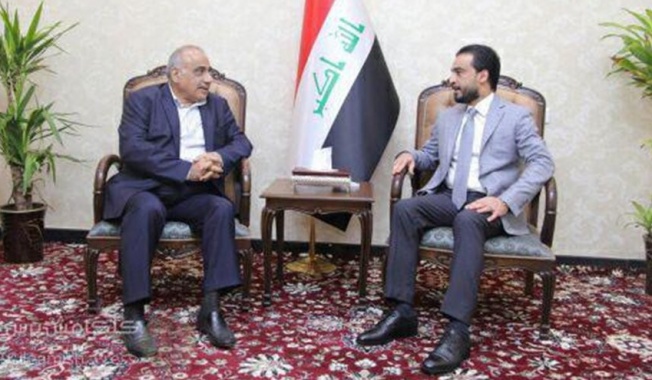 Likewise, the fact that a bloc abstained? (Al-Nasr, the former Iraqi Prime Minister’s bloc in the case)? Why?

Al-Halbousi’s eagerness to attend the parliament session may prevent Prime Minister Adel Abdul-Mahdi from speaking and expose the American position.

After the American side became aware of Mr. Adel Abdul-Mahdi’s intentions of direct conversation and his insistence on revealing many hidden facts, the Americans asked Al-Halbousi to attend this session today and not to allow Mr. Abdul Mahdi to speak directly …

Al-Halbousi, Speaker of the Iraqi Council of Representatives, boycotted the speech of Mr. Abdul Mahdi in the scheduled session to discuss the decision to remove American forces from Iraq.

At the beginning of the session, Al-Halbousi left the presidential seat and sat next to Mr. Abdul-Mahdi, after his request to cut off the live broadcast of the session, and a public conversation took place between the two parties. The voice of Adel Abdul Mahdi was raised.

Here is the text of the conversation that took place according to what the deputies sitting near the platform heard.

American Bargaining for the Reconstruction of Iraq:

“The Americans are the ones who destroyed the country and wreaked havoc on it. They refuse to complete building the electrical system and infrastructure projects. They have bargained for the reconstruction of Iraq in exchange for giving up 50% of Iraqi oil imports, so I refused and decided to go to China and concluded an important and strategic agreement with it. Today, Trump is trying To cancel this important agreement. ”

The American President’s threat to the Iraqi Prime Minister to liquidate him directly with the Minister of Defense, and the Marines are the third party that sniped the demonstrators and the security men:

“After my return from China, Trump called me and asked me to cancel the agreement, so I also refused, and he threatened me with massive demonstrations that toppled me. Indeed, the demonstrations started and then Trump called, threatening to escalate in the event of non-cooperation and responding to his wishes, so that the third party (Marines snipers) would target the demonstrators and security forces and kill them from the highest structures and The US embassy in an attempt to pressure me and submit to his wishes and cancel the China agreement, so I did not respond and submitted my resignation and the Americans still insist to this day on canceling the China agreement and when the defense minister said that who kills the demonstrators is a third party, Trump called me immediately I am physically threatened Ptsfitna and defense minister in the event of talk about the third party “

“The Sloppy Dossier”: Plagiarism and “Fake Intelligence” Used to Justify the 2003 War on Iraq: Copied and Pasted from the Internet into an “Official”...

Our Media is Lying, But We Will Not Be Silent/ Eva Bartlett

In the name of the Father the Son, the Holy Spirit...