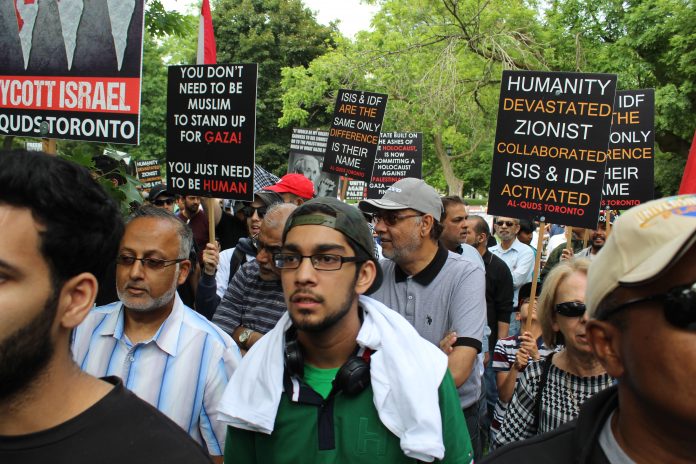 The state of Israel brands itself as a peaceful, democratic, civilized oasis, steadfast in the midst of a hostile desert, surrounded by barbarity and threats to its very existence.

None of it is true.

Greater Israel is increasingly a rampaging Zionist project that has lost its sense of Judaism, and its democratic, civilized ideals.

It is a militarized, racist, apartheid country that denies and negates the rule of international law at every convenience as it deludes itself and its allies by manipulating the memory of one of history’s most hideous moments: the holocaust.

Memories of the obscenity of the holocaust should teach values of cultural pluralism, empathy and acceptance of the “other”, tolerance and respect for the downtrodden.

Instead, it is being exploited to serve the darker agenda of an ethnocentric, imperial, settler/colonial polity.

Renowned author Ilan Pappe explains these subterranean manipulations in The Idea Of Israel:

“From vindication of the brutal killing of Palestinians in 1948 and subsequently, in the war against Palestinian infiltrations, through the instigation of public panic on the eve of the 1967 war, to the justification of intransigent official positions on peace following the war, to the present oppressive policies against the Palestinians in the occupied territories, — Holocaust memory has been a supremely useful and accessible means of silencing criticism and pushing a policy of belligerence.”

Palestinian Israelis are second-class citizens. The Admissions Committee Law, for example — which was recently upheld by the Israeli Supreme Court — legalizes racial segregation. According to this law, 43% of Israeli residential areas are legally entitled to deny entrance to Palestinian Arab citizens of the Israeli state. Most of this land, to which the Palestinians are not welcome, was originally confiscated from Palestinian refugees. Clearly, legal segregation laws are not compatible with “democracy” or “moral governance”.

Israel’s segregationist policies extend outwards as well. Israel engages in serial denial and negation of international law by constructing and maintaining rather than dismantling its Separation/Apartheid walls.

The International Criminal Court (ICJ) ruled in 2004 that the West Bank wall was “illegal in its entirety,” and that compensation should be paid to those affected. Additionally, the U.N General Assembly passed a resolution supporting the ICJ’s call to dismantle the wall.

Not surprisingly, construction and maintenance of the Gaza “security fence” as well as the West Bank Apartheid wall, continues to this day.

Furthermore, the blockage of Gaza — a strip of land on the coast of the Mediterranean Sea, has essentially reduced Gaza to the status of a “concentration camp”. Professor Richard Falk — world-renowned professor of international law and the United Nations Special Rapporteur on the situation of human rights in the occupied territories – characterizes the blockade of Gaza as collective punishment, and therefore a violation of the Geneva Conventions and international humanitarian law.

The notion that the Israeli Defense Forces (IDF) is “moral” or “righteous” also rings hollow: during the recent invasion of Gaza, known euphemistically as Operation Protective Edge, Israeli’s military murdered 501 children, and 1,473 civilians, plus 157 combatants.

In what appears to be yet another operation of ethnic cleansing, Israel also targeted schools, hospitals, and the sole power station.

Operation Protective Edge seemingly satisfies the definition of “genocide”, as defined by Articles II and III of the 1948 Convention on the Prevention and Punishment of Genocide:

“Article II: In the present Convention, genocide means any of the following acts committed with intent to destroy, in whole or in part, a national, ethnic, racial or religious group, as such:

(a) Killing members of the group;

(b) Causing serious bodily or mental harm to members of the group;

(c) Deliberately inflicting on the group conditions of life calculated to bring about its physical destruction in whole or in part;

(d) Imposing measures intended to prevent births within the group;

(e) Forcibly transferring children of the group to another group.

Article III: The following acts shall be punishable:

(b) Conspiracy to commit genocide;

In an earlier article, I referenced the slaughter of North America’s indigenous peoples starting in 1492, and I remarked that the genocidal cycles are repeating themselves time and again.

If humanity were to internalize the real lessons of the holocaust, we could break these toxic cycles and avert further disasters. The on-going tragedies in Palestine (and elsewhere), however, indicate that we have failed to learn our lessons.

Lessons for Ethically-compromised Physicians in 2021 from the Doctors Trial at Nuremberg (1946 – 1947)/ By Dr. Gary Kohls

Canadian doctor under fire for speaking out against lockdowns, gov’t medical coercion

MPP Randy Hillier on the COVID Op Against Humanity/ Interview by...