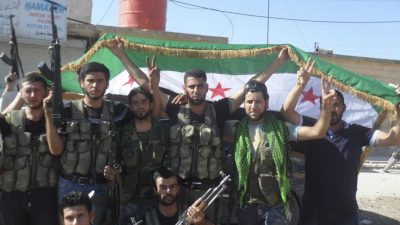 The recent visit of Free Syrian Army commanders to Washington amounts to an exercise in war propaganda.[1]

The visit serves to legitimize the FSA terrorists in the eyes of the broader public by perpetuating the fiction that they are somehow “moderate”, or that they represent organic opposition to the Syrian government.

Nothing could be further from the truth.  The CIA alone spends about one billion per year[2] supporting terrorists in Syria. So the FSA aren’t Free.  They are beholden to their imperial masters and underwriters. Nor are they “Syrian” in terms of being legitimate Syrian opposition. And they are not an “army” either, although they are part of an “army” of foreign-backed Al Qaeda affiliated terrorists infesting Syria and beyond.

We do know, however, that the FSA were amongst the terrorists who stormed Syria from Turkey and beheaded many of Lilly Martin’s Christian neighbours.[3]

We do know that the terrorists who invaded and desecrated the primarily Christian town of Maaloula, Syria, included FSA terrorists.[4]

We also know that FSA terrorists were amongst those who terrorized people in Aleppo for years.[5]

The FSA, alongside other terrorist factions, including ISIS and al Nusra, have terrorized Syria and Syrians for years.

Naturally the Western media presstitutes and the criminal politicians will mention none of this.  But the truth is there for all who seek peace and justice.  Presumably, Western populations would not support the FSA if they knew the truth.