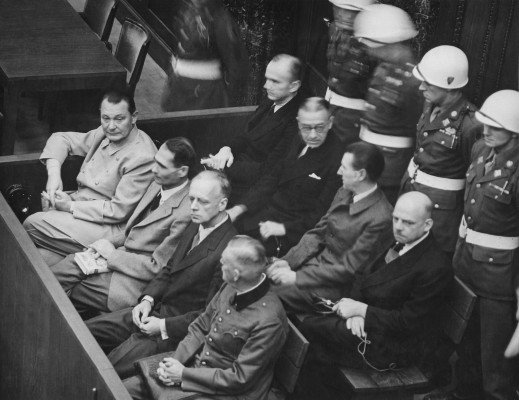 The Medical Case, U.S.A. vs. Karl Brandt, et al. (also known as the Doctors’ Trial), was prosecuted in 1946-47 against twenty-three doctors and administrators accused of organizing and participating in war crimes and crimes against humanity in the form of medical experiments and medical procedures inflicted on prisoners and civilians.

Physician and surgeon Karl Brandt, the lead defendant, was the senior medical official of the German government during World War II; other defendants included senior doctors and administrators in the armed forces and SS. Brandt had been appointed by Adolf Hitler to head the Euthanasia Program, Aktion T4. The defendants were indicted on four counts:

1. Conspiracy to Commit War Crimes and Crimes Against Humanity;

2. War Crimes (I.E., Crimes Against Persons Protected by the Laws of War, Such as Prisoners of War);

3. Crimes Against Humanity (Including Persons Not Protected By The Laws Of War); and

4. Membership in a Criminal Organization (the SS).

Karl Brandt, the lead defendant, was the senior medical official of the German government during World War II; other defendants included senior doctors and administrators in the armed forces and SS.  See Harvard Documents

These experiments were conducted on concentration camp inmates. Other crimes involved the killing of Jews for anatomical research, the killing of tubercular Poles, and the euthanasia of sick and disabled civilians in Germany and occupied territories. The defendants were charged with ordering, supervising, or coordinating criminal activities, as well as participating in them directly. The fourth count concerned membership in the SS (Schuttzstaffeln) of the Nazi regime.

Human Experiments and Other “Medical” Crimes (itemized in counts 2 and 3):

The great weight of the evidence before us to effect that certain types of medical experiments on human beings, when kept within reasonably well-defined bounds, conform to the ethics of the medical profession generally. The protagonists of the practice of human experimentation justify their views on the basis that such experiments yield results for the good of society that are unprocurable by other methods or means of study. All agree, however, that certain basic principles must be observed in order to satisfy moral, ethical and legal concepts:

1. The voluntary consent of the human subject is absolutely essential. This means that the person involved should have legal capacity to give consent; should be so situated as to be able to exercise free power of choice, without the intervention of any element of force, fraud, deceit, duress, overreaching, or other ulterior form of constraint or coercion; and should have sufficient knowledge and comprehension of the elements of the subject matter involved as to enable him to make an understanding and enlightened decision. This latter element requires that before the acceptance of an affirmative decision by the experimental subject there should be made known to him the nature, duration, and purpose of the experiment; the method and means by which it is to be conducted; all inconveniences and hazards reasonably to be expected; and the effects upon his health or person which may possibly come from his participation in the experiment.

2. The experiment should be such as to yield fruitful results for the good of society, unprocurable by other methods or means of study, and not random and unnecessary in nature.

3. The experiment should be so designed and based on the results of animal experimentation and a knowledge of the natural history of the disease or other problem under study that the anticipated results justify the performance of the experiment.

4. The experiment should be so conducted as to avoid all unnecessary physical and mental suffering and injury.

5. No experiment should be conducted where there is an a priori reason to believe that death or disabling injury will occur; except, perhaps, in those experiments where the experimental physicians also serve as subjects.

6. The degree of risk to be taken should never exceed that determined by the humanitarian importance of the problem to be solved by the experiment.

7. Proper preparations should be made and adequate facilities provided to protect the experimental subject against even remote possibilities of injury, disability or death.

10. During the course of the experiment the scientist in charge must be prepared to terminate the experiment at any stage, if he has probable cause to believe, in the exercise of the good faith, superior skill and careful judgment required of him, that a continuation of the experiment is likely to result in injury, disability, or death to the experimental subject.

Dr Gary G. Kohls is a retired American family physician who practiced holistic (non-drug) mental health care during the last decade of his professional career. His patients came to see him asking for help in getting off the psychotropic drugs to which they were addicted and which they knew had sickened them and disabled their brains and bodies.

Dr Kohls lives in Duluth, MN, USA and writes articles that deal with the dangers of American fascism, corporatism, militarism, racism, malnutrition, Big Pharma’s psychiatric drugging and over-vaccination agendas, and other movements that threaten the environment, prosperity, democracy, civility and the health and longevity of the planet and the populace.

He is a Research Associate of the Centre for Research on Globalization.

Dr Kohls’ Duty to Warn columns have been archived at a number of websites around the world, including the following:

The COVID-19 “Vaccine” and the Nuremberg Code. Crimes Against Humanity, Genocide

Video: Medical Martial Law and the Nuremberg Code in the Age of COVID-19

25 March 2020The original source of this article is Global Research

mRNA Vaccines Put You at Risk for Acute Coronary Syndrome/ By...

Do Not Give Up Your Rights ~ Dr. Julie Ponesse’s Remarkable...