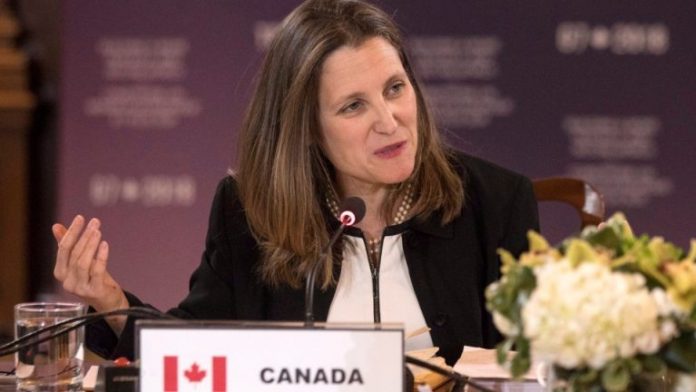 The Canadian instigated Lima Group has been dealt a probably fatal blow that ought to elicit serious discussion about this country’s foreign policy. But, don’t expect the media or politicians to even mention it.

In a likely death knell for a coalition seeking to overthrow the Venezuelan government, Peru’s new Foreign Affairs Minister called the Lima Group the country’s “most disastrous” ever foreign policy initiative. Héctor Béjar said, “the Lima Group must be the most disastrous thing we have done in international politics in the history of Perú.”

Prior to Baptiste and Béjar’s statements, the Lima Group had lost a handful of members and its support for Juan Guaidó’s bid to declare himself president had failed. Considering its name, the Peruvian government’s aggressive turn against the Lima Group probably marks the end of it. As Kawsachun News tweeted a Peruvian congressman noting, “the Lima Group has been left without Lima.”Step Aside USA, Canada Is the New Bully in Our South American ‘Backyard’

The Lima Group’s demise would be a major blow to Trudeau’s foreign policy. Ottawa founded it with Peru. Amidst discussions between the two countries foreign ministers in Spring 2017, Trudeau called his Peruvian counterpart, Pedro Pablo Kuczynski, to “‎stress the need for dialogue and respect for the democratic rights of Venezuelan citizens, as enshrined in the charter of the Organization of American States and the Inter-American Democratic Charter.” But the Lima Group was established in August 2017 as a structure outside of the OAS largely because that organization’s members refused to back Washington and Ottawa’s bid to interfere in Venezuelan affairs, which they believed defied the OAS’ charter.

Canada has been maybe the most active member of the coalition. Former Foreign Minister Chrystia Freeland participated in a half dozen Lima Group meetings and its second meeting was held in Toronto. That October 2017 meeting urged regional governments to take steps to “further isolate” Venezuela.

At the second Lima Group meeting in Canada, a few weeks after Juan Guaidó proclaimed himself president, Trudeau declared, “the international community must immediately unite behind the interim president.” The final declaration of the February 2019 meeting called on Venezuela’s armed forces “to demonstratetheir loyalty to the interim president” and remove the elected president.

Freeland repeatedly prodded Caribbean and Central American countries to join the Lima Group and its anti-Maduro efforts. In May 2019 Trudeau called Cuban president Miguel Díaz-Canel to pressure him to join Ottawa’s effort to oust President Maduro. The release noted, “the Prime Minister, on behalf of the Lima Group, underscored the desire to see free and fair elections and the constitution upheld in Venezuela.”

In a sign of the importance Canadian diplomats placed on the Lima Group, the Professional Association of Foreign Service Officers gave Patricia Atkinson, Head of the Venezuela Task Force at Global Affairs, its Foreign Service Officers award in June 2019. The write-up explained, “Patricia, and the superb team she assembled and led, supported the Minister’s engagement and played key roles in the substance and organization of 11 meetings of the 13 country Lima group which coordinates action on Venezuela.”

Solidarity activists have protested the Lima Group since its first meeting in Toronto. There were also protests at the second Lima Group meeting in Canada, including an impressive disruption of the final press conference. At a talk last year, NDP MP Matthew Green declared “we ought not be a part of a pseudo-imperialist group like the Lima Group” while a resolution submitted (though never discussed) to that party’s April convention called for Canada to leave the Lima Group.

Hopefully the Peruvian and St Lucia governments’ recent criticism marks the end of the Lima Group. But, we should seek to ensure it doesn’t disappear quietly. We need a discussion of how Canada became a central player in this interventionist alliance.

Afghanistan Was Based on Lies. Will the Militarists Apologize?/ By Yves Engler