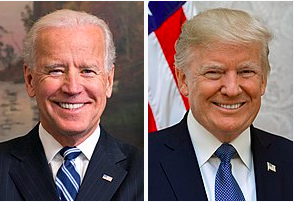 I am not a fan of Donald Trump.  But this concerted action on behalf of the corporate media to prevent the President from speaking on election results is tantamount to a de facto “Color Revolution” Made in America.

Trump is not an online “conspiracy theorist” subject to media censorship. He is the sitting president of the US.

We must understand, however, that this election is not between Trump and Biden.

Biden is a groomed politician, a trusted proxy, serving the interests of the financial establishment.

The Smoking Gun is Covid-19.  Biden is committed to closing down the US economy as well as the global economy as a means to “combating the killer virus”.

The closing down of the global economy is a “crime against humanity”.

Biden is the presidential candidate of the upper echelons of the financial establishment.

Trump has not endorsed the dominant Covid narrative.  He favors the reopening of the US economy. And that’s why he is now being “sidetracked” by the “Deep State”. Of course, this “sidetracking” goes back to November 2016. (It is not limited to Trump’s stance on Covid-19).

According to The Atlantic in a timely article published on November 2, 2020:

“President Donald Trump has repeatedly lied about the coronavirus pandemic and the country’s preparation for this once-in-a-generation crisis”.

Here, a collection of the biggest lies he’s told as the nation endures a public-health and economic calamity.

Below are pointed comments by three prominent authors, who present an independent viewpoint: Max Parry, Vanessa Bealey, and Catte Black

(They are not supporters of Donald Trump)

I am going to be crucified by many of my fellow “leftists” for saying this, but something smells incredibly fishy about these election results. How in the world can the Democrats lose several house seats, gain no ground in the senate, but manage to win the presidency?How did Trump win Ohio again (which previously went to Obama twice) by 8 points just like he did in 2016, but lose all these other key swing states at the 11th hour? Am I really supposed to believe a candidate as poor as Biden got more votes than even Obama in his 2008 landslide? .The projection polls were again way off and Trump was massively exceeding expectations getting several million more votes than last time, but he still ends up losing? Did the media cut away in the middle of Bush’s speeches when he was stealing the 2000 election? .None of this adds up and you have partisan blinders on if you can’t see it..Not to say the GOP doesn’t engage in voter suppression, but there is no way in a million years you will ever convince me there isn’t a coup d’etat under way right now.

“The world has really gone insane. Trump is still President of the US and he just got fact checked live on air.

I am not pro Trump but if you can’t see the madness heading our way, please try to inform yourself  beyond a binary argument of Trump vs Biden.

Both are largely irrelevant compared to the gathering predator class storm on the horizon.

They are both part of the same theatre that is designed to plunge humanity into chaos for the foreseeable future while the powers behind the throne roll out the Great Reset road map.

Thought I was shockproof but this really shocked me – and should shock anyone with any sense of what this actually means.

Like him or hate him this man is the elected and sworn-in president of the United States – and  he’s being silenced in front of our eyes by the paid and unelected employees of a privately owned propaganda outlet.The original source of this article is Global ResearchCopyright © Prof Michel Chossudovsky, Vanessa Beeley, Max Parry, and BlackCatte, Global Research, 2020

Force Feeding Us On Genetically Engineered Food – Do You Want...