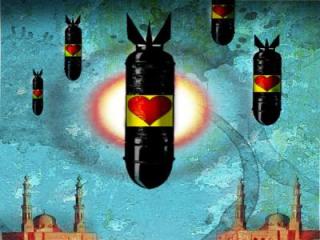 The West uses chemical weapons in Syria, against Syrians. President al Assad does not.

U.S. forces use internationally-banned weaponized white phosphorous against civilians in both Mosul, Iraq, and Raqqa, Syria.

When white phosphorous hits civilians, it ignites the flesh, and burns it to the bone. The gases released suffocate and burn from the inside out. Wounds reopen when exposed to air. The intended purpose is to slaughter and terrify civilians.

U.S. forces also use MGM – 140B rockets in both cities. The rockets detonate in mid-air and scatter about 274 anti-personnel grenades, each of which kills any person within a 15 meter radius.

Coalition forces use these weapons to murder, to ethnically cleanse local populations, and to free up territory for Western-backed terrorist forces. In the case of Raqqa, Syria, the West hopes to integrate it into a separate “Kurdistan” polity – divide and conquer is the underlying strategy.

In both Mosul and Raqqa, the U.S. –led coalition provided escape routes for their ISIS proxies. Terrorists from Mosul were sent to Syria, and terrorists from Raqqa were re-directed to DeirEzzor.[1]

All of these terrorists are proxies/strategic assets for the West. They have different “brand” names: ISIS/IS/ISIL, FSA, Ahrar al-Sham etc., but they all serve the same function, which is to destroy and balkanize Syria at the behest of their Western employers.

Use of white phosphorous in Iraq by the US (Source: Murica Today)

All of the Western “interventions” in Syria amount to war crimes, but Western propaganda is ubiquitous, and powerful. It amounts to a Ministry of Propaganda, and it has reduced mainstream corporate messaging to being an agency for war and disaster. Hence, Western populations are for the most part oblivious to the crimes being perpetrated in their names.The Criminal Regime Change / Dirty War On Syria, The Siege of Deir Ezzor by ISIS Proxy Terrorists

The U.S-led coalition is trying to destroy one country after another so that the U.S can basically control what is left of the world … if there is anything left. Warmongering elites hope to have total control, to deny and negate international law and national boundaries, and to make people world-wide unwitting servants to international oligarch classes.

Elections will be held, but political rhetoric will be mostly meaningless. The recent elections ofPresident Trump and Prime Minister Trudeau bear witness to the fact that the deep/dark state and its agencies already have more power than elected officials. How many campaign promises did either of the two aforementioned politicians actually honor?

The “Axis Of Resistance”, which includes Syria, Russia, Iran, and Hezbollah, offers hope for international law, nation state sovereignty, self-determination, freedom and liberty. Should they succeed in Syria – which is very likely – then a multipolar world will have space to emerge.

A multipolar world will be more democratic in orientation (politically and economically), and more compliant with international law. It will offer more hope for wealth, prosperity, and life for broad-based populations, and not just for the international oligarchy.

It is very telling that the U.S government recently rejected Tulsi Gabbard’s Stop Arming Terrorists Act.[2] In a sane world, such a bill would have a 100% approval rating, but we do not live in a sane world.

The West’s rejection of sanity and its embrace of international criminality means that others will have to fight for us.

Their fight is righteous, whereas the West’s subservience to agencies of propaganda is pathetic.

ABOUT US
Former high school teacher Mark Taliano is an author and activist, an independent investigative reporter, and a Research Associate with the Centre for Research on Globalization (Global Research). In his book Voices of Syria, Mark combines years of research with on-the-ground observations to present an informed and well documented analysis that refutes mainstream media narratives about the dirty war on Syria.
© 2021 Mark Taliano. All Rights Reserved. Website Designed by Vision Design
MORE ARTICLES
October 8, 2019