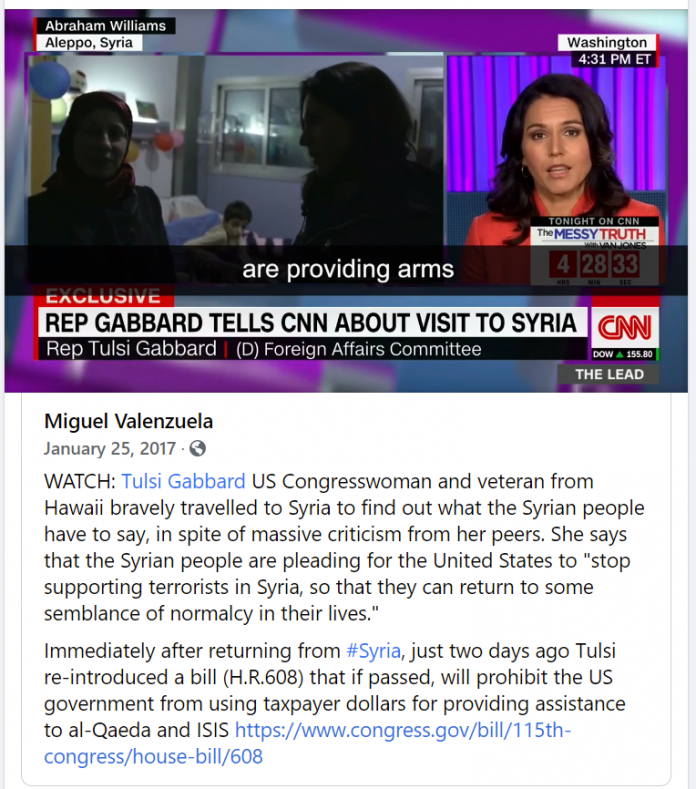 Welcome back to the Lead Our World Lead now, a desperate plea for help, seven year old Bana Al Abed has become the face of innocent civilian suffering in Syria’s deadly civil war. The young girl is now safely living in Turkey with her family. But earlier today, she tweeted a message to President Trump, quote, I beg you, can you do something for the children of Syria if you can? I will be your best friend. Thank you. Unquote.

This comes as a fragile cease fire between Syrian government forces and rebel factions is holding for now. Joining me now in a CNN exclusive is Democratic Congresswoman Tulsi Gabbard of Hawaii. She just returned from a secret trip to Syria.

Congresswoman Gabbard, thanks for coming and sharing your story with us.

Hello. Good to be with you.

So you were in Syria for four days. Did you meet with President Bashar al-Assad?

You know, my reason for going to visit Syria was really because of the suffering of the Syrian people. That has been weighing heavily on my heart. I wanted to see if there was in some small way a way that I could express the love and the aloha and the care that the American people have for the people of Syria and to see firsthand what was happening there, to see that situation there.

What did Assad have to say?

Initially, I hadn’t planned on meeting him when the opportunity arose to meet with him. I did so because I felt it’s important that if we profess to truly care about the Syrian people, about their suffering, then we’ve got to be able to meet with anyone that we need to if there is a possibility that we could achieve peace. And that’s exactly what we talked about.

Now, I know the the maxim that the people say in the military that you don’t make you don’t make peace with your friends, you make peace with your enemies. But obviously, Bashar al-Assad is responsible for thousands of deaths and millions of people being displaced during this five year long civil war. Did you have any compunctions about meeting with somebody like that, giving him any sort of enhanced credibility because a member of the United States Congress would would meet with someone like that, whatever you think about President Assad.

The fact is that he is the president of Syria in order for any peace agreement, in order for any possibility of a viable peace agreement to occur. There has to be a conversation with him. The Syrian people will determine his outcome and what happens with their government and their future. But our focus, my focus, my commitment is on ending this war that has caused so much suffering to the Syrian people, to these children, to these families, many of whom I met on this trip.

So Congressman Adam Kinzinger, a friend of yours, also a military veteran, a Republican, he said on Twitter, when you heard about your your your visit, quote, fact finding mission fact. Fifty thousand plus dead children in Syria. Tulsi Gabbard, I hope you did meet with their butcher, Assad. Now, Assad has used chemical weapons on his own people. You said it’s going to be up to the Syrian people, but there really aren’t free and fair elections in Syria.

I’ll tell you what I heard from the Syrian people that I met with, Jake, walking down the streets in Aleppo, in Damascus, hearing from them. They expressed happiness and joy at seeing an American walking through their streets. But they expressed a question. They said, why is it that the United States, its allies and other countries are providing support, are providing arms to terrorist groups like al-Nusra, al-Qaida, Ahrar al Sham, ISIS, who are on the ground there raping, kidnapping, torturing and killing the Syrian people, children, men, women, people of all ages?

They asked me, why is the United States and its allies supporting these terrorist groups who are destroying Syria when it was al-Qaida who attacked the United States on 9/11, not Syria? I didn’t have an answer for them.

Obviously, the United States government denies providing any sort of help to the to the terrorist groups that you’re talking about. They say they provide help for them, for the rebel groups.

Reality is, Jake. The reality is and I’m glad you brought up that point, because this is an often talked about thing by people like Adam Kinzinger and others saying, well, we’ve got to support the moderate rebels. Every place that I went, every person that I spoke to, I asked this question to them and without hesitation, they said there are no moderate rebels. Who are these moderate rebels that that people keep speaking of, regardless of the name of these groups, the strongest fighting force on the ground in Syria is al-Nusra or al-Qaida and ISIS.

That is a fact. There’s an. A number of different other groups, all of them essentially are fighting alongside with or under the command of the strongest group on the ground that’s trying to overthrow Assad. The Syrian people recognize and they know that if President Assad is overthrown, then al-Qaida or a group like al-Qaida that has been killing Christians, killing people simply because of their religion or because they won’t support their terror activities, they will take charge of all of Syria.

This is the reality that the people of Syria are facing on the ground and why they are pleading with us here in the United States to stop supporting these terrorist groups, let the Syrian people themselves determine their future, not the United States, not some foreign country.

And we’ve been showing video of your trip from your trip in the minute we have left. Tell us the most striking image you have from your visit to this war torn region.

Jake, you know, the destruction is very real, both on the physical buildings and the things that people have gone through, looking into their eyes and hearing firsthand from a girl who is now 19, but who when she was 14 years old, these rebels that people say we should continue supporting, they came and kidnapped her. They raped her multiple times. They killed her father in cold blood right in front of her and her little brother. All she is asking for, literally, is for the United States to stop supporting these so-called rebel groups, stop supporting these terrorists so that the Syrian people can begin to try to get back to some semblance of normalcy in their lives.

Congresswoman Tulsi Gabbard, Democrat of Hawaii, thank you so much. We appreciate your your coming and telling us the story. Thanks, Jake.

“Moderate Rebels” never existed …. except as Western “Intelligence” construct to...

Victims of Rashideen Betrayed & Politicized by Western Media, Exploited by...