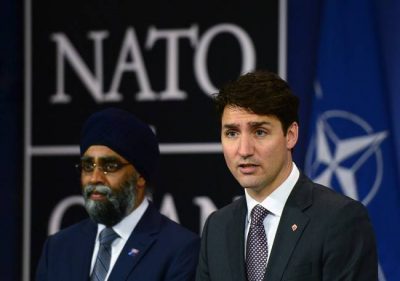 Canada’s NATO contributions are directly linked to the current diseconomy plaguing this country. Last year alone, Canada spent $32 billion on military spending, according to Public Accounts Canada, largely to bolster US imperialism abroad, to the detriment of humanity.

U.S-led NATO is an aggressive military alliance.  NATO members, including Canada, do not respect the rights of sovereignty and territorial integrity of target countries.  NATO’s negation of international law has been amply demonstrated throughout the “Regime Change” war on Syria, but also in a host of post WW2 invasions, including Yugoslavia, Afghanistan, Iraq, Libya, Yemen, and beyond.

On the one hand, NATO membership drains public coffers, while on the other, it advances a criminal, toxic agenda which both restricts public options for a sustainable economy, and our ability to address real dangers facing Canada and humanity.  NATO fabricates the perception that it is ensuring our safety when in reality it is endangering us all.

Whereas Canada and the world needs to address catastrophic climate change, the military is the top consumer of fossil fuels, and one of the biggest emitters of hazardous wastes.

Whereas Canada and the world needs Peace, NATO membership ensures the opposite.

Robin Mathews describes Imperial globalization, a hidden driver behind NATO, in these words:

“ Imperial globalization is criminal manipulation of people and events for the profit of a few. It includes massive ‘disinformation’ about equality, benefits, social development, law, improved standards of living etc. the disinformation is spread by ‘authoritative’ news sources. In the hands of gigantic, wealthy, private corporations, globalization is a , process which works to erase sovereign democracies and replace them with ‘treaties’ sub-states, economic colonies ruled by faceless, offshore, often secret, unaccountable power.”[1]

NATO globalization, then is a cancer devouring us all, predicated on Lies.

We need to say No to globalizing NATO military bases, No to economic straightjackets and diseconomies, and Yes to self-determination and sustainable economies.

Syria’s Children: “Condemned to Live”, Shackled by the Scars of US-NATO...