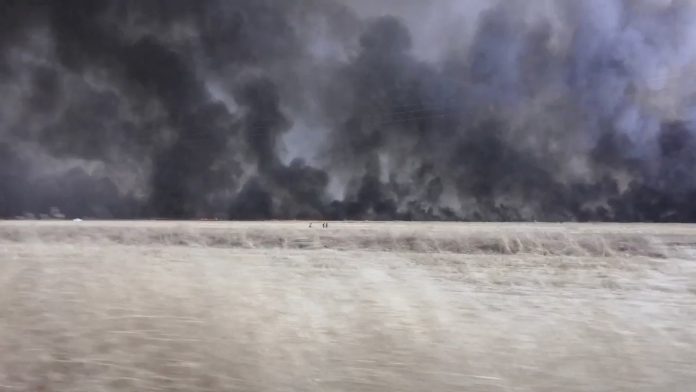 NATO terrorists murdered the Grand Mufti’s son.  They murdered the Minister of Reconciliation’s[1] son, all with a view to corrupting the Syrian government and to bending its will.  It didn’t work.

NATO terrorists stole everything they could steal from Aleppo, and shipped the stolen machinery to Turkey. What they couldn’t steal, they destroyed, immediately disemploying about tens of thousands of desperate people. Aleppo’s industrial base is now being reborn and rebuilt.

NATO coalition warplanes and their allied terror proxies destroyed about 80% of Raqqa.  Coalition planes have, since the beginning of Operation Inherent Resolve, targeted infrastructure, as have NATO terrorists.[3]  They target schools and hospitals and power plants and water sources.  They target and destroy everything and anything that sustains life and a civilized country. They have not succeeded in bending the will of Syria and its peoples. But that remains their goal.

More recently, SDF terrorists have been burning Syrian food crops. The goals are the same. This, and the West’s on-going economic warfare against Syria and its peoples, is also likely to fail.  But desperation will corrupt some.

For the past month, Kurdish Contras in Syria implemented a scorched earth campaign against Arab and Assyrian farm lands, with 100s of acres of crops burnt to the ground in an effort to force the majority population to accept Kurdish minority rule and occupation by the Empire. Yesterday, as a follow up to this campaign, Saudi sent an envoy who has toured the areas along with the US ambassador offering money to Arab and Assyrian tribal leaders, now hungry and financially ruined after their annual harvest was destroyed, in return for their allegiance against their homeland. [4]

So here we see again Empire’s strategy of imposing depredations with a view to creating desperation, and exploiting the ensuing opportunities for corruption.  All of the strategies amount to Supreme International War Crimes, and Empire, clothed in impunity, is even now planning similar operations against Iran and its peoples.

Empire is imposing global war and poverty on humanity, as “International law” bends to its will, and the U.N sighs in exasperation.

[3] Prof. Michel Chossudovsky, “Air Strikes against Syria: Who are the War Criminals? Who is Supporting Al Qaeda? Russia or America?” (https://www.globalresearch.ca/air-strikes-against-syria-who-are-the-war-criminals-who-is-supporting-al-qaeda-russia-or-america/5548799) Accessed 15 June, 2019