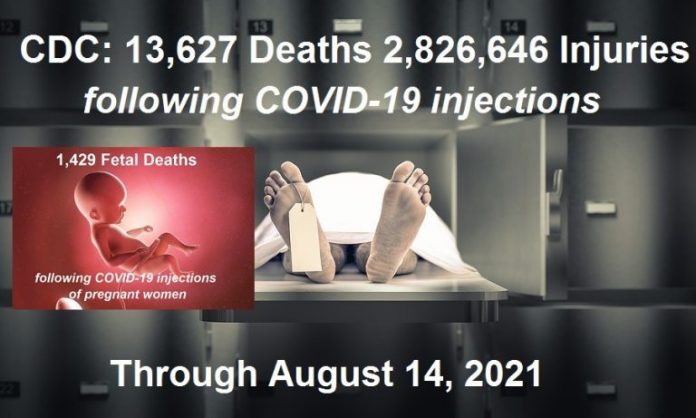 According to the most recent stats released by the CDC this past Friday, August 27, 2021, their Vaccine Adverse Event Reporting System (VAERS) now has recorded more than twice as many deaths following COVID-19 shots during the past 8 and a half months, than deaths recorded following ALL vaccines for the past 30 years.

This has to be the most censored information in the U.S. right now, even though these statistics come directly from official government statistics.

And all of this has happened in just over 8 months.

From January 1, 1991 to November 30, 2020, the last month before the COVID shots were given emergency use authorization, there were only a total of 6,068 deaths recorded (mostly infant babies) following ALL vaccines. (Source.)

The FDA Has Approved the Pfizer COVID-19 Injection – Deal with it!

I have literally received about 50 emails from people DEMANDING that I change the text on several of our articles that reported the FDA has now given full approval to the Pfizer/BioNTech shots, stating that I am wrong, and that the FDA did not actually approve this shot.

Here is one, for example, that I received just as I started writing this article today:

Subject: your wrong assertion that the FDA have approved the Pfizer injection

Message Body:
The Pfizer injection has NOT been approved by Pfizer. Dr E Alexander former White House Covid adviser to Trump government on the Stew Peters show made it clear that it is not the Pfizer injection that has been approved. It is another vaccine that is not available. He says it is a FDA trick. You need to correct this on your site as soon as possible

No, I am not wrong, and no, I am not going to change our articles. YOU are wrong. Here is the FDA Press Release from their website: FDA Approves First COVID-19 Vaccine

And yes, I do understand that there is a lot of controversy around them approving this, and that it is illegal. This is what we have previously published:

The FDA did approve the Pfizer/BioNTech shots, but they also apparently extended the EUA on existing doses of the shot. So now there are apparently two different “vaccines” produced by Pfizer/BioNTech, one under the EUA, and one approved by the FDA yesterday.

The name of the one that the FDA approved is “Comirnaty.” You can read the FDA press release here.

A letter was sent by the FDA to Pfizer extending the EUA on existing doses, and you can read that letter here.

A letter was sent by the FDA to BioNTech approving the “Comirnaty vaccine,” and you can read that letter here.

It appears that even the “Comirnaty” shot is also still covered by an EUA.

Why do you people think that this is an issue worth arguing about? Do you think that you can use this information in a court of a law and prevent an employer or school from mandating that you get the shot?

Because if that is your motivation for emailing me and demanding that I retract these statements, then you are the fool.

And it doesn’t surprise me, as the message above I quoted shows, that these are mostly deranged Right-wing Trump supporters emailing this to me. They’ll believe just about anything if Trump or one of his high profile supporters say it is so.

Well I have some news for you from one who has fought against the FDA’s criminal actions for about 20 years now: Almost EVERYTHING the FDA does is illegal, and it has never stopped them before, so why would you expect them to stop now, when the stakes are so high and their bosses in Big Pharma are raking in $TRILLIONS for the COVID shots?

In 2019, before anyone even knew what the word “COVID” was, we published this article: Study: 98% of FDA Laws Are Unconstitutional

Angela C. Erickson and Thomas Berry of the Pacific Legal Foundation have just published a new report examining illegally issued regulations at the Department of Health and Human Services (HHS).

Their study found that:

Unconstitutional rulemaking procedures are rife at HHS, especially at the FDA.

They analyzed who were the people making these rules at HHS in what they claim is the largest study ever done on this subject.

[This] has never been studied before: a large expansion of rulemakers who are not democratically accountable.

These unaccountable rulemakers are not constitutionally authorized to issue final rules that have the force of law.

But, as this study shows, that hasn’t stopped them.

The results of their study found:

that a majority of HHS regulations were illegally issued by low-level officials or career employees who had no authority to do so. The Food and Drug Administration (FDA) was the most frequent and clear-cut violator.

The FDA’s illegal rules were so numerous that they skewed the results for the rest of HHS.

Among FDA final rules, 98% were issued by career employees who have no constitutional authority to do so.

Secondly, the courts have already ruled on whether or not an employer can mandate the COVID shots while they were all still under an EUA, and the employees lost. See this article we published on June 14, 2021: Texas Judge Proves Relief from COVID-19 Bioweapon Shots will NOT Come from the Judiciary – Upholds Mandatory Shots for Hospital Workers

A U.S. District Judge in “Red State” Texas who was originally appointed to his position by former President Ronald Reagan in 1985, has ruled against 117 Houston Methodist hospital employees who were suspended without pay for refusing to take an experimental, non-FDA approved COVID-19 shot as a condition for employment.

Not only did he rule against them, he wrote a scathing opinion mocking them, proving once again that Big Pharma controls the judiciary as well as the Republican Party and so-called “conservatives.”

In November of 2020, before the COVID-19 shots were even given emergency use authorization, we published an article about a “Stay of Action” that was filed against the FDA for using faulty PCR test results in determining if COVID-19 shots were “effective” in stopping “the virus.” See: “Stay of Action” Filed Against FDA to STOP Approval of COVID Vaccine for Using Faulty PCR Tests in Trials

Dr. Mike Yeadon and other European doctors filed something similar against the EMA to stop this from getting approval.

And what was the result? NOTHING.

Anyone who still thinks that we will push back tyrannical medical psychopaths from implementing their plan to enslave everyone by taking them to court to “prove” all of this is illegal, is not living in reality.

There is only one way out of this: massive non-compliance. And here in the U.S., it most certainly will involve using the 2nd Amendment.

So while all of these deaths and crippling injuries that are being reported in VAERS following COVID-19 shots should have put a stop to this madness of mass vaccination of experimental shots a long time ago, the exact opposite is now happening: More COVID “booster” shots are on the way, and are already being implemented in Pfizer’s lab-rat country, Israel.

If you have a “Green Pass” in Israel because you got both Pfizer COVID-19 shots, it will soon expire if you don’t get a 3rd Pfizer “COVID-19 booster shot.”

After being confronted with the fact that widespread vaccination isn’t enough to stop COVID (just look at Israel’s case numbers), public health authorities in the tiny Mediterranean country have decided that the best solution is to double-down on the jabs by defying the WHO and demanding all citizens must get a third jab. Talk about moving the goalposts…

As Israel’s government expands availability of Pfizer-produced COVID booster shots to all inoculated residents age 12 and older, it has also decreed that all those who don’t opt for the third jab will lose their green pass privileges come October, according to a report in RT.

Here is Australia’s Chief Health Officer Dr Kerry Chant stating that Australians need to get used to “COVID vaccines” for years to come:

‘We need to get used to being vaccinated with COVID vaccines for the future … I can’t say COVID is not going to be with us forever,’ Dr Chant told reporters on Monday.

‘As a public health doctor we always want to have diseases go, to be totally eliminated, but that is not on the horizon in the near future.

‘Booster doses and repeat doses will be part of that.’

And here it is directly from the tyrant’s mouth. The CEO of Pfizer has already admitted that they are developing booster COVID shots for future variants that are not even here yet:

Meanwhile, existing, now “approved” COVID shots, will be given to children ages 5 to 11 by September.

And tell me again why it is so important that I need to go back and edit all of our articles that say the FDA has now fully approved the Pfizer COVID-19 shots because they “actually didn’t”?

You fools need to move on and start worrying about your children, especially if you are putting them in schools, because they are the target now, and no court of law is going to save you or your children.

Just ask the people in Florida who trusted that their Red State Governor had ended mandatory school masks.

Featured image is from HIN

Why Are Americans Being Coerced to Submit to Injection with a...