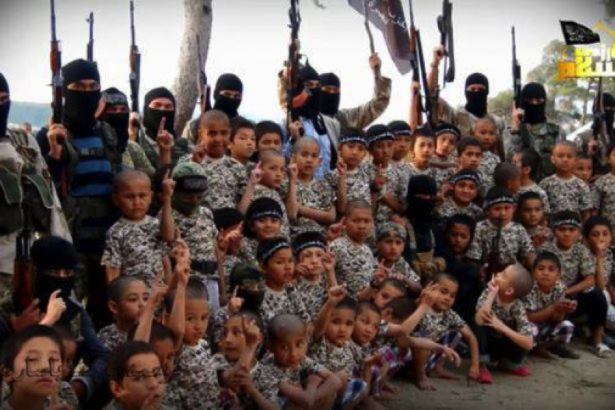 Here’s the deal with the whole, “Oh the poor oppressed Uighurs!!!” routine that people need to understand. This is a propaganda buildup by the neocons who happily mass-slaughter Muslims (and Christians) in Iraq, Syria, Libya and Yemen. It’s critical to remember Operation Cyclone in Afghanistan and how the US built up the Taliban and Saudi Mujahedeen including Osama bin Laden as the heroes and brought them to power there (and then been “fighting” them for the past 17 years while building up the poppy trade and trying to gain control of the trillions of $$$ in minerals for US corporations).

The Uighurs are ethnically Turkic people. Many have been systematically radicalized over the past 2 decades by Turkey whose leader is the defacto head of the distributed Muslim Brotherhood mafia, and extremists from Saudi Arabia, Pakistan and Qatar. There are thousands of Uighurs who went to Syria on “jihad” to fight alongside al Qaeda and ISIS. They hold an area in Idlib province called Jisr al Shughur. US neocons (the “Israel-first” and Cold War loving regime change addicts of DC) who used the “WMDs in Iraq” scam and the “incubator babies in Kuwait” hoax to fool Americans into supporting those wars are now promoting the Uighurs – possibly as their new project to create another proxy war in the Xinjiang Province of China.

The area is rich in oil, gas, and coal and is also a critical part of China’s Belt and Road (new Silk Road) trade routes development project.(Xinjiang is expected to produce 35 million tons of crude oil by 2020, a 23 percent increase over 2012, according to the Ministry of Land Resources. Xinjiang also has the country’s largest coal reserves, an estimated 40 percent of the national total, and the largest natural gas reserves. https://www.nytimes.com/…/china-invests-in-xinjiang…. )

At the start of this article are pics of the “poor, oppressed” Uighurs in Idlib, Syria. Their male children are sent to jihad school and learn to kill and hate – some “rebels” in Syria use boys as young as 8 to be snipers. The Chinese government’s alleged “concentration camps” are not – from what I can tell they seem to be half prison, half school in an attempt to counteract the radicalization (I’m sure they aren’t luxury getaways). But don’t ever forget that Osama bin Laden and the Taliban were America’s pre-packaged, marketed and sold “moderate, freedom-fighting rebels”.

I think the Chinese can smell an upcoming Operation Cyclone 2.0 – I can smell the stink of it emanating to Virginia from Washington DC.

This is from SOFREP, a news outlet of US military and intelligence veterans: “Oh, you Chinese who do not understand what people say. We are the soldiers of the Caliphate, and we will come to you to clarify to you with the tongues of our weapons, to shed blood like rivers and avenging the oppressed,” the Uighur fighters say in the video. The video released on Monday marks the first time Chinese Uighur fighters have publicly claimed allegiance to ISIS, a development that could mean attacks on China are imminent and will likely come with the support of ISIS resources from elsewhere on the globe. ( https://sofrep.com/…/new-isis-video-targets-china…/ )

And don’t forget that ISIS was created in the US Camp Bucca prison system in Iraq. There are many – even mainstream – media reports on that, and during the Syrian war, Obama knowingly used them as assets. This is what Mike Flynn, who was head of the US Defense Intelligence Agency at the time, said in a televised interview with Mehdi Hassan. (I can’t stand Flynn actually – but he was telling the truth in this and personally I think this is why he was targeted by the Russiagate garbage. Here’s the transcript of the interview with Flynn describing the assistance to extremists and terrorists. https://www.aljazeera.com/…/transcript-michael-flynn… )

Neocons run US foreign policy regardless of who is in office. This is the coup General Wesley Clark described, about how the neocons took over when GW Bush came to power. (Clark is another military/industrial complex fanatic imo but again he was telling the truth in this. Here’s that video: https://www.youtube.com/watch?v=TY2DKzastu8 )

When Flynn said plainly that Obama had willfully used ISIS, al Qaeda and the Muslim Brotherhood as assets in Syria, he had to be shut down. John Kerry even admitted on a verified audio recording released by Wikileaks that the US had been “watching ISIS grow” in hopes of putting pressure on Assad to step down. He was speaking in a closed door session with the Syrian opposition that has always been dominated by the Muslim Brotherhood (backed by Turkey and Qatar) and shills of Saudi Arabia. (These are just a few reasons why I despise US reckless foreign policy. And I think this is a main reason why Julian Assange is in Belmarsh prison.

Wikileaks was proving the US was aiding and abetting al Qaeda and ISIS in Syria as we also helped terrorists in Libya.) That is when Assad appealed to Putin for help. General Soleimani of Iran (murdered by Trump this January) went to Russia to convey the message and seriousness of the situation according to reports I’ve read. After ISIS took over Syria’s richest oil fields they were transporting the oil into Turkey where it was then distributed into Europe and elsewhere. EU embargoes against Syrian oil were dropped for oil coming from “rebel” areas so ISIS had a steady income stream of millions of dollars almost daily.

All this happened while the US was “watching”. This spurred Putin to go in militarily as Kerry describes in the video. (Here’s the video of Kerry: https://youtu.be/dHiIhCrQO6I )

Within the first few months of Russia being in Syria, the ISIS oil convoys to Turkey were getting obliterated. (EU member states have agreed to ease an oil embargo on Syria to allow opponents of President Bashar al-Assad to sell crude. https://www.bbc.com/news/world-middle-east-22254996 )

And lastly, here is Ben Swann showing how the US was training and funding ISIS and al Qaeda. It’s much worse than even Ben describes here. There weren’t any “secular moderates” that ever had any power – the armed groups even from the start were Muslim Brotherhood or Wahhabi/Salafi (like Saudi Arabia) dominated and targeted any non-Sunnis including Christians for expulsion and extinction particularly the Alawites and other Shia rooted sects. In fact, US support included the massacre of Syrian Army soldiers at al Thardeh in Deir Ezzor, Syria – where I was in October of 2017. The US led coalition attacked the Syrian soldiers, killing almost 100, that were holding that strategic hill against ISIS in a stagnant, well-marked position. After the US attack, ISIS immediately took over al Thardeh – and I mean instantaneously – and the US coalition never attacked them. https://youtu.be/YSIoBSGTQ0c

It would be possible – difficult with the rugged terrain but possible – to send weapons, intelligence, money and other support overland from Afghanistan to Xinjiang via the Wakhjir Pass, part of the Wakhan Corridor. The US has requested the Chinese open the corridor for US military movements but the Chinese government has denied the request. https://hir.harvard.edu/wakhancorridor/

Politics in the pub. War In Syria: Who is Responsible? By...