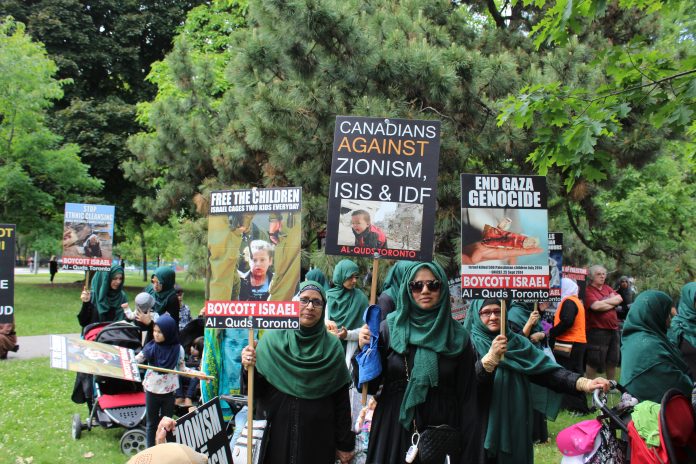 The Canadian government’s efforts to publicly oppose Islamophobia[1] and racism yet again belie sinister undercurrents that are the real “Canada”.

The real Canada supports Zionism and Wahhabism, and sectarianism. It supports exclusiveness rather than inclusiveness and tolerance.

Wahhabism, grown and nurtured in Canada’s ally, Saudi Arabia, is an archetype of exclusivism and sectarianism.  It is anti-Islamic, and instrumentalized by imperial powers, including Canada, to destroy prey nations such as secular, pluralist, democratic Syria, a country that takes pride in being inclusive and tolerant.

The coalition currently committing daily war crimes against Syria uses ISIS, al Qaeda, and affiliates as proxies. Sectarianism is used as a tool to destroy and balkanize.Terrorist- occupied areas are blank slates where extremist, literalist derivations of Sharia law are imposed, where religious icons and institutions of all faiths are destroyed, where women have no rights.

There is no basis in the Qur’an, argues Zafar Bangash[2], for any of these depravities.  Further, he adds, Wahhabism is at odds with the vast majority of Muslims, labelled “kaffirs” by Wahhabis, despite the influence of petrodollars and Western governments and agencies that propagate it.

One tactic used by deep state agencies to create the necessary domestic preconditions for slaughtering multitudes of all faiths in what is now an overseas holocaust, is the false flag. In Canada[3], for example, Canadian agencies set up a hapless couple to stage a bombing incident on Canada Day, July 1, 2013, with a view to creating Islamophobia.

Another tactic is to disappear the vast majority of Muslims from the Canadian mindset, hence Syrians – mostly secular and pluralist like most Canadians – are disappeared from the Canadian consciousness while the savage ISIS/al Qaeda terrorists (covert proxies) and the Saudi absolute Monarchy (allies) are presented as the norm. Nothing could be further from the truth, but the same Canadian agencies that commit war crimes as policy also control the public consciousness. The truth about the “Anglo/Zionist/Wahhabi” -led axis is submerged and disappeared at all levels in Western societies.  Not only does mainstream messaging consist of war propaganda, but public libraries and book shops also submerge the truth.

Madeleine Albright, who intoned that killing  500,000 (the real number is closer to 600,000) Iraqi children was “worth it” is thought to be a reliable source to preach against fascism[4]— which the West supports and grows at this very moment in Kiev and beyond – and fake stories about a non-existent “revolution” in Syria are amplified.

Canada Fuels Assault on Syria, but Syrians Are Resilient

Meanwhile, Zionist apartheid Israel, another strong supporter of the terrorists in Syria, is increasingly being protected by Canadian agencies and legislation. Canada recently adopted the Israeli lobby’s definition of anti-semitism which, according to the British Columbia Civil Liberties Association, “is extremely vague, open to misinterpretation” and a “threat to freedom of expression.”[5]

So there we have it. The real Canada is largely misgoverned by an axis of unelected polities which intentionally fabricate Islamophobia and other hatreds so that globalized war and poverty and walls and concentration camps can continue to flourish.  And the crimes are being committed behind the Big Lies of humanitarianism, freedom, democracy, and inclusiveness.

Jab Mandates are the Rehearsal, the Future will be Worse/ By Prof Haskell

mRNA Vaccines Put You at Risk for Acute Coronary Syndrome/ By...

Jab Mandates are the Rehearsal, the Future will be Worse/ By...