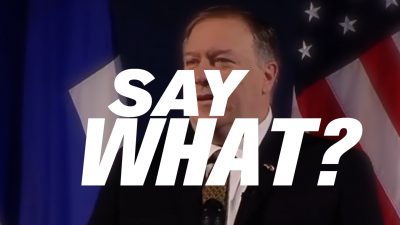 The Trump administration is threatening to destroy Iraq’s economy by withholding a critical source of money that is controlled by the Federal Reserve. The threat is a response to the Iraqi parliament’s unanimous decision to end Washington’s 17 year-long military occupation. The Iraqi people and their representatives in parliament are incensed by the recent assassination of Iran’s most revered general, Qassem Soleimani, who was savagely incinerated by a Hellfire missile on the direct orders of Donald Trump. Iraqi prime minister, Adel Abdul-Mahdi, and his supporting MPs believe that the US committed a gross violation of Iraq’s sovereignty by killing a visiting dignitary without first obtaining the government’s permission. This is why the parliament and the prime minister have asked the administration to respect the wishes of the Iraqi people and withdraw all US troops from the country.

In response to parliament’s request, President Trump has threatened to impose harsh economic sanctions on Iraq while the State Department has issued a defiant statement that flatly rejects Iraq’s demands and refuses to even discuss the matter. Here is an excerpt from the statement:

“America is a force for good in the Middle East. Our military presence in Iraq is to continue the fight against ISIS and as the Secretary has said, we are committed to protecting Americans, Iraqis, and our coalition partners….At this time, any delegation sent to Iraq would be dedicated to discussing how to best recommit to our strategic partnership—not to discuss troop withdrawal, but our right, appropriate force posture in the Middle East. …. There does, however, need to be a conversation between the U.S. and Iraqi governments not just regarding security, but about our financial, economic, and diplomatic partnership. We want to be a friend and partner to a sovereign, prosperous, and stable Iraq.”

It would interesting to know whether ‘shadow president’, Mike Pompeo, composed the communique himself or if he was assisted by his fellow neocon advisors at State. In any event, the terse directive leaves no doubt that Iraq remains the exclusive property of the US government who will not permit any challenge to its iron-fisted rule. By any definition, Iraq remains an American colony, that is, “a country that is under the full or partial political control of another country and occupied by (soldiers) from that country.” Pompeo’s imperious response shows that, despite the nonsensical hype in the western media, Iraq is neither independent nor sovereign.

A closer look at the State Department’s communique hints at the manner in which Pompeo intends to keep Iraq under Washington’s thumb. When he says, “There .. needs to be a conversation … about our financial, economic, and diplomatic partnership.” What he appears to mean is: ‘We have no intention of launching another costly counterinsurgency operation in Iraq. Instead, we will withhold the proceeds from Iraq’s oil revenues, which will drive the government into bankruptcy thrusting the country into another agonizing period of sectarian conflict.’

This new strategy, which is tantamount to blackmail, was fleshed-out in a number of recent articles which garnered only modest attention in the media. According to the Wall Street Journal:

“The State Department warned that the U.S. could shut down Iraq’s access to the country’s central bank account held at the Federal Reserve Bank of New York, a move that could jolt Iraq’s already shaky economy, the officials said….

The warning regarding the Iraqi central bank account was conveyed to Iraq’s prime minister in a call on Wednesday,….The Federal Reserve Bank in New York, which can freeze accounts under U.S. sanctions law… said it doesn’t comment on specific account holders.

This is how the Trump administration does business. After invading Iraq on false pretenses, killing a million of its people, and reducing large swaths of the country to an uninhabitable wastelands, the US is now conducting a financial ‘scorched earth’ campaign aimed at forcing Iraq to comply with Washington’s diktats. It is hard to see how the State Department can characterize this behavior as “a force for good” but perhaps they are being facetious. In any event, the danger to Iraq’s fragile economy is quite real as can be seen in this article by the French News Agency AFP. Here’s an excerpt:

The PMO (Prime Ministers Office) got a call threatening that if U.S. troops are kicked out, ‘we’ – the U.S. –will block your account at the Federal Reserve Bank in New York,”….The Central Bank of Iraq’s account at the Fed was established in 2003 following the U.S.-led invasion that toppled ex-dictator Saddam Hussein…Under United Nations Security Council Resolution 1483, which lifted the crippling global sanctions and oil embargo imposed on Iraq after Saddam’s invasion of Kuwait, all revenues from Iraqi oil sales would go to the account.

Iraq is OPEC’s second-biggest crude producer and more than 90% of the state budget, which reached $112 billion in 2019, derives from oil revenues… To this day, revenues are paid in dollars into the Fed account daily, with the balance now sitting at about $35 billion, Iraqi officials told AFP…..Every month or so, Iraq flies in $1-$2 billion in cash from that account for official and commercial transactions.

“We’re an oil-producing country. Those accounts are in dollars. Cutting off access means totally turning off the tap,” the first Iraqi official said… The second official said it would mean the government could not carry out daily functions or pay salaries and the Iraqi currency would plummet in value. “It would mean collapse for Iraq,” the official said.” (“Iraq warns of ‘collapse’ if Trump blocks oil money”, Daily Sabah)

This article is key to understanding US policy in Iraq, so let’s take a minute to summarize:

1– Iraq’s wealth is in the hands of the Fed

From the earliest days of the invasion (2003) the Federal Reserve has held the revenues from Iraq’s oil proceeds. That money has never been directly under the control of the Iraqi people or their elected representatives.

Iraq is presently OPEC’s second-biggest crude producer and more than 90% of the state budget, which reached $112 billion in 2019, derives from oil revenues. While this may sound like a significant amount of money, it’s worth noting, that Iraq’s petroleum contracts were drawn up under US supervision which means that Iraq is neither being adequately compensated for its oil nor are the revenues being fairly distributed among the Iraqi people.

3– The Fed is a political actor that is deeply involved in the implementation of U.S. foreign policy

The Federal Reserve is a political actor that plays a essential roll in spreading neoliberalism. The Fed works with government agents to prevent countries like Iraq from controlling their own wealth or from establishing their own sovereign independence.

Iraq currently has $35 billion in an account at the Fed that it does not control, does not have access to, and cannot be used to improve the lives of the Iraqi people. Instead, the Iraqi government must wait for its American overlords to release the money in dribs and drabs as it sees fit. Now that parliament has angered Uncle Sam with their demand that US troops leave the country, Washington is threatening to “turn off the tap” paving the way for an economic collapse followed by widespread social unrest.

5–Iraq must sell its oil in USD

Iraqi oil is solely denominated in US Dollars which strengthens the petrodollar system that recycles revenues into US debt. This, in turn, helps to maintain the dollar’s dominance as the world’s reserve currency which is a political tool Washington uses to impose its own development model on foreign countries.

This brief recap helps to illustrate that US policy in Iraq is a shameless extortion racket that only serves the interests of Washington and its ally, Israel. What these bullet-points do not cover, however, is the way that US policy has failed to address Iraq’s battered and neglected infrastructure, its perennially-high unemployment, its largely-polluted drinking water or the grinding, demoralizing poverty faced by a large percentage of the population. (“23% of the Iraqi people live below the poverty line while more “than half of the urban population lives in slum-like conditions.” Electricity is only available for roughly 8 hours a day while summer temperatures frequently top 100 degrees Fahrenheit. 20% of households in Iraq use an unsafe drinking water source, while 65% must use public networks as a main source of drinking water.
Unemployment stands at 13% while youth unemployment is soaring at 25%.)

So while the oil giants continue to rake in burgeoning profits on record oil extraction, millions of Iraqis are living hand-to-mouth in an increasingly hardscrabble and dystopian environment.

The media typically scapegoats the government for Iraq’s problems, (“mismanagement, bureaucratic inefficiency, and corruption”) but the real source of the troubles is the US invasion. Before the invasion, Iraq was a relatively-secure, moderately-prosperous country. Now it is a broken, dysfunctional failed state that remains helplessly pinned beneath Washington’s boot-heel. That is unlikely to change under the present administration which has already expressed its intention to extend the occupation into perpetuity.

The Iraq war is the greatest catastrophe of our time. Aside from a handful of fanatical Likudniks and behemoth oil companies, no one has benefited at all. A 5,000 year-old civilization was sadistically bombed into oblivion so Washington and its ally, Israel, could redraw the map of the Middle East and establish their hegemony over a strategically-critical region of the world.

Author Nir Rosen summed it up like this in an interview on Democracy Now 10 years ago. He said,

Mike Whitney is a frequent contributor to Global Research.

The Globalization of War: America’s “Long War” against Humanity

Click here to order.“Yankee Go Home” Is Chanted in Baghdad after Parliament Asks for US Troop ExpulsionThe original source of this article is The Unz ReviewCopyright © Mike Whitney, The Unz Review, 2020

ABOUT US
Former high school teacher Mark Taliano is an author and activist, an independent investigative reporter, and a Research Associate with the Centre for Research on Globalization (Global Research). In his book Voices of Syria, Mark combines years of research with on-the-ground observations to present an informed and well documented analysis that refutes mainstream media narratives about the dirty war on Syria.
© 2021 Mark Taliano. All Rights Reserved. Website Designed by Vision Design
MORE ARTICLES
October 8, 2019