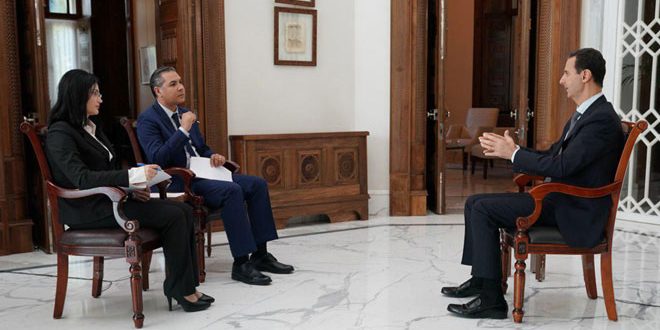 Under the title “President al-Assad of Syria tells the truth for all who care to listen”, the Canadian political analyst Mark Taliano wrote an article arguing how a political figure tells the truth and takes a bold stand against the international cancer that is destroying international law, nation-state sovereignty, and humanity itself, with its war lies and its international terrorism.

“They [Western politicians] bow to diktats from largely unelected polities. They are hollow, straw figures who sell out their countries and those whom they proclaim to represent with a whim. They have failed to “Stand on guard for thee”. They project “progressive perceptions” as they support al Qaeda/ISIS and Supreme International war crimes. Canada is a NATO puppet state, a rogue regime, simply pretending otherwise,” he added.

Taliano affirmed that most westerns refuse the truth and thus share responsibility for the crimes committed by those who falsely claim to represent them, while President al-Assad shines light on foundational truths.

On her part, the veteran British independent journalist Vanessa Beeley commented on the transcript of President Assad’s interview with Syrian TV and Al Ikhbaria channel he gave on October 31, 2019 by saying:”All I can say is that I wish we had one world leader or politician in the West who is as lucid, consistent, balanced, patriotic, intelligent, wise and compassionate – a true statesman. They do not exist in the West anymore.”

The British Priest  Dr. Andrew Ashdown regrets that those outside the country who claim to care for the future of Syria are unlikely to listen to the wide-ranging interview given by President al-Assad.

He shared the full text on his Facebook account because he believes that the interview is not likely to even be mentioned in western media, except possibly to be misquoted or twisted.

“As always, President Assad speaks with clarity and wisdom. He exhibits pragmatism about the realities on the ground and strategies for dealing with those complexities; determination to resist terrorism and restore the territorial integrity of the nation whilst recognising the need to consider the interests of different communities; appreciation for the assistance of allies, especially the vital role being played by Russia in the region; and determination to preserve the constitutional plurality of Syrian society in whatever emerges from current and future processes, in which it is Syrians who must decide the future of the nation,” Dr. Ashdown said.

“Under the pretext of Fighting ISIS”/By Ibrahim Mohammad﻿